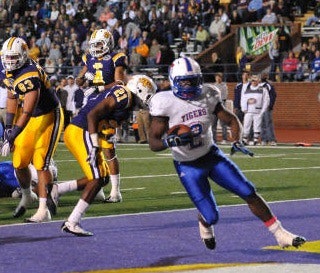 In an initiative designed to boost student-athlete academic performance, the NCAA has selected six universities to participate in its Limited-Resources Institutions Grant Program Pilot. The schools, which include four historically Black institutions, will receive grants totaling more than $4.3 million that will help them better fulfill NCAA Division I requirements.

“As the academic expectations for Division I student-athletes continue to increase, the NCAA is proud to offer assistance to those institutions that have demonstrated need and a plan for using these funds to contribute to student-athlete success,” NCAA Executive Vice President Dr. Bernard Franklin said in a statement.

Schools eligible for the grant program are “Division I institutions in the non-Football Bowl Subdivision and in the bottom 10 percent of resources as determined by per capita institutional expenditures, athletics department funding and Pell Grant aid were eligible to apply for the program,” according to the NCAA.

Schools were allowed to apply for a total of $300,000 annually over three years. In addition, the schools have to match grant dollars annually with either direct funds or in-kind contributions. Each institution must make a 25 percent match in the first year, 50 percent in the second year and 75 percent in the third year.

“Funding is necessary. One of the things that the grant will do is supplement the funding that the athletics department and the university have in the different initiatives that are already in place,” says Teresa Phillips, athletics director at Tennessee State University.

Philips notes that NCAA grants should prove a huge enhancement for academic support largely by increasing tutoring and mentoring opportunities for individual student-athletes. In addition, there will a strong push to bring student-athletes into the school’s pre-freshman summer academic bridge program, which has been held during summers 2011 and 2012, she adds.

“Instead of 10 or 12, we hope to see as many 40 student-athletes in our summer bridge program,” Phillips says.

Coppin State has outlined eight initiatives that will be supported by NCAA grant funding. The initiatives included “funding of summer school and winter session, hiring additional staff in the academic services area, the creation of a faculty enrichment program and peer mentoring program, purchasing technology that would create a mobile athletic computer lab for student-athletes while traveling, designating resources to support academic readiness, allocating funds to develop a broad based Academic Progress Rate plan, the development a fifth-year degree completion program to increase real-time graduates and the creation of a campus-wide Academic Progress Rate team,” according to the university.

Eighty percent was a goal Ramsey set for Coppin State student-athletes almost five years ago and it will be reached within the next three years, he predicts.

“This NCAA grant program is going to do wonders for us,” Ramsey says.

Norfolk State Athletics Director Marty Miller says one key focus for the Norfolk, Va.-based HBCU will be providing academic and tuition support for fifth-year students who are no longer eligible to play on the school’s athletic teams.

“We continue to see a rise in the number of student-athletes who complete their (athletic) eligibility and they just need a few more classes to graduate. We can do more to help them,” Miller says.

Officials from the selected schools are expected to participate in a launch meeting during the 2013 NCAA Convention to meet with NCAA staff “to discuss expectations, review next steps and develop a timeline of the grant program pilot,” according to the NCAA.