A Special Tribute to the Unsung Athletics Directors of College Sports 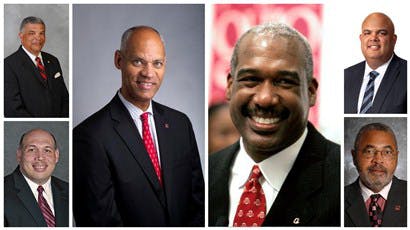 In the second installment of a four-part series, the Diverse editors sought to recognize those current and former athletics directors across the country who have blazed the trails and opened doors for minorities in sports.

We appreciate their advocacy and leadership in the collegiate sports community. Join us as we salute these impactful sports figures who have advocated for and led the charge toward diversity and who have left positive and indelible marks on the world of college sports.

Nationally recognized as a leader in intercollegiate athletics, Kevin Anderson has more than two decades of leadership experience. During his first year, he achieved a school record with a 17th place finish in the Learfield Sports Directors’ Cup standings.

Each of his first two seasons was highlighted by NCAA national championships in field hockey and national runner-up finishes in men’s and women’s lacrosse. The Terps followed with a strong campaign in 2011-12, when they finished 27th in the standings.

Anderson has instituted an inclusive management style that combines a passion for providing a quality experience for Maryland student-athletes with a thoughtful business acumen that has him managing the Terrapins’ $59 million budget and more than 180 employees.

He was elected president of the National Association of Collegiate Directors of Athletics in 2012.

Dr. McKinley Boston is the man behind New Mexico State University athletic department’s “Journey to Excellence”—a five-year strategic plan that serves as the administration’s road map to becoming one of the best mid-major athletic programs in the country.

Boston was named director of athletics in 2004 and serves on the NCAA Management Council Leadership cabinet—the highest level of oversight addressing the legislative process of the NCAA. He is also a member of the NCAA Certification Committee and served for five years as a member of the Division I Men’s Basketball Committee.

A former professional football player with the New York Giants, Boston was a special teams captain and played with the Vancouver British Columbia Lions of the Canadian Football League.

He attended the University of Minnesota as an undergraduate and competed in football and was a first All-Big Ten Football player and Academic All-Big Ten.

Promoted to deputy athletic director in 2011, Sean T. Frazier also served as senior associate athletic director for operations at the University of Wisconsin. Frazier came to Wisconsin in 2007 after serving as director of athletics at Merrimack College in North Andover, Mass.

He is the department’s chief of staff for day-to-day operations with oversight of football and men’s and women’s hockey, athletic development, ticket office, badger sports properties, strategic planning, diversity plan coordination; as well as liaison for boosters, the Big Ten Conference and WCHA, the chancellor’s office and the dean’s leadership council.

In addition to Wisconsin, he has worked as director of athletics at Clarkson University with oversight of 20 NCAA sports. Before Clarkson, he was the athletic director at Manhattanville College, where he was instrumental in increasing overall team win percentage and team GPA.

A former student-athlete himself, Frazier played football for Alabama from 1987-91 and was part of a Southeastern Conference Championship team in 1989.

With a distinguished career in intercollegiate athletics, Warde J. Manuel was named director of athletics at the University of Connecticut in 2012. He is a 1990 graduate of the University of Michigan, where he played football and competed in track and field.

Manuel previously led a 20-sport program at the University of Buffalo. When he arrived at UB, there were four programs—football, men’s basketball, wrestling, and baseball—that fell far below the NCAA Academic Progress Rate cut score of 925. With a focused academic plan, all four teams posted a four-year APR rate above the cut score, and, at the end of 2009-10, 10 of UB’s 20 sports had scores of 975 or above.

Buffalo enjoyed great on-field success during Manuel’s time, as the football team participated in the 2009 International Bowl and the men’s basketball team made postseason appearances in three of the past seven years. Olympic sports also thrived with three-straight Dad Vail Regatta titles by the rowing team, six wrestlers earning spots at the 2011 NCCA Championship and the women’s tennis team making an appearance in the 2008 NCAA tournament.

Named “one of the most powerful people in collegiate sport,” Gene Smith serves as associate vice president and director of athletics at Ohio State University.

At Ohio State, Smith oversees the nation’s most comprehensive and one of its most successful collegiate athletic programs. The department sponsors 36 fully funded varsity sports with more than 1,000 student-athletes regularly competing for Big Ten Conference and NCAA Championships.

The athletics department is completely self-supporting, and in fiscal year 2010-11, it transferred nearly $30 million in assessments to the university, including more than $15 million in grant-in-aid reimbursement.

A former college athlete and coach, Smith is passionate about developing the total student-athlete—academically, athletically and socially.

In September 2012, Roby was appointed to the NCAA Division I Men’s Basketball Committee. The 10-member committee is responsible for selecting and seeding the NCAA tournament field every year.

Roby has been referenced extensively in the media, and his opinion pieces have been published on the editorial pages of many well-known publications. He has previously been named one of the “100 Most Influential Sports Educators in America” by the Institute of International Sport.

Roby served six seasons as men’s basketball head coach at Harvard University and three years as an assistant coach. Before joining Harvard, Roby was the assistant coach at Stanford University, Dartmouth College and the U.S. Military Academy at West Point.

Roby is a 1979 graduate of Dartmouth College, where he was co-captain of the basketball team.