A Special Tribute to the Pacesetting Media Members of College Sports 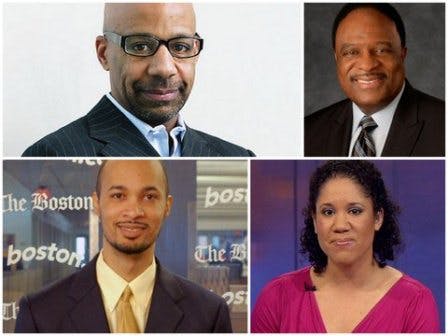 Many are familiar with the work of organizations such as Black Coaches and Administrators and the Knight Commission on Intercollegiate Athletics, which serve as policing organizations to monitor the NCAA’s commitment to diversity in hiring as well as athletic programs’ commitment to academics, respectively. But rarely is the time taken to salute the unsung heroes and heroines of college sports, who, day in and day out, busy themselves with opening the doors through which others metaphorically run, dribble, catch and score on their way to glory, fame and acclaim.

Join us as we salute these impactful sports figures who have advocated for and led the charge toward diversity and who have left positive and indelible marks on the world of college sports.

No stranger to television, James Brown is a special correspondent for CBS News, contributing original reported pieces, and appears on various CBS News broadcasts. Brown began his assignment in March 2012, on “CBS This Morning: Saturday.”

Since February 2006, Brown has served as host for the CBS Television Network’s NFL pre-game show, The NFL Today, and had served as play-by-play announcer for the Network’s coverage of college basketball, including the NCAA Tournament.

Brown also hosts “Inside the NFL,” which debuted in 2008 and won the Sports Emmy Award for Outstanding Studio Show Weekly.

He wrote his first book in September 2009, Role of a Lifetime: Reflections on Faith, Family and Significant Living.

Brown served as host of “FOX NFL Sunday” for 12 years prior to returning to CBS Sports. He joined FOX Sports in June 1994 after a decade with CBS Sports. He hosted “Hang Time with James Brown,” daily commentaries on Sporting News Radio. He was one part of the original team of reports for HBO’s “Real Sports with Bryant Gumbel” and a boxing host for HBO pay-per-view.

His sportscasting career began in Washington, D.C. as a play-by-play announcer for the NBA Washington Bullets (now known as the Wizards) for Home Team Sports.

Brown graduated from Harvard with a degree in American government. A standout on the basketball court, he received All-Ivy League honors in his last three seasons at Harvard University and captained the team in his senior year. He was selected as a fourth-round draft pick by the NBA’s Atlanta Hawks and a seventh-round pick by the Denver Nuggets. In 1996, Brown was inducted into the Harvard Hall of Fame.

Known for her agility on the court and a winning smile, Kara M. Lawson is a professional player in the Women’s National Basketball Association (WNBA) and a women’s basketball television analyst for ESPN, covering college basketball and the NBA.

On January 12, 2007, she was the first woman to work as a nationwide broadcast analyst for an NBA game, when the New Orleans Hornets took on the Washington Wizards in Oklahoma.

Primarily a shooting guard, Lawson signed a three-year contract extension with the Connecticut Sun in August 2012.

Lawson attended the University of Tennessee (UT) and played for the Lady Vols basketball team, coached by Pat Summitt. She enrolled in UT’s College of Business, and graduated in 2003 with a degree in finance. Lawson received the Frances Pomeroy Naismith Award from the Women’s Basketball Coaches Association as the best senior player under 5 feet 8 inches.

On July 10, 2008, Lawson was selected to represent the United States with the USA women’s national basketball team at the 2008 Summer Olympics in Beijing. She helped the United States capture the gold medal and led the team in points (15) during the gold medal game against Australia, going a perfect 5-5 from the field and 4-4 from the free throw line. Lawson was named a finalist for the 2012 Olympic team in London.

As the new executive sports editor of the South Florida Sun Sentinel, Gregory H. Lee Jr. is one of three Black journalists currently leading the sports departments at major daily newspapers. He joins Lisa Bell Wilson of the Buffalo News and Larry Graham of the San Diego Union-Tribune, who are already in the editor ranks.

Lee left The Boston Globe after eight years, where he served as senior assistant sports editor, managing reporters and leading the section’s daily coverage. In 2008, Lee led the section’s coverage of the Boston Celtics’ championship run and its first NBA title in 20 years and served the Globe as its lead on-site editor at the Summer Olympic Games in Beijing.

Before heading to the Globe, Lee was an editor at The Washington Post, where he held a number of positions during his five-year tenure. Prior to working at the Post, Lee worked at the Times-Picayune in New Orleans as a copy editor, later advancing to slot editor, where he was responsible for designing the sports section and running the sports desk.

In his new role, Lee leads coverage of four professional teams in South Florida, including the Miami Heat. He will also lead coverage of the state’s college programs, more than 300 high schools and the paper’s digital efforts in sports.

A longtime national sports columnist, Kevin Blackistone is a frequent panelist on ESPN’s “Around the Horn,” an occasional contributor to National Public Radio and co-author of A Gift for Ron, a memoir by former NFL star Everson Walls published in November 2009 about his kidney donation to one-time teammate Ron Springs.

In 1981, he started his journalism career as a city reporter at The Boston Globe. In 1983, he moved to Chicago to write for The Chicago Reporter, a monthly investigative magazine. In 1986, Blackistone joined The Dallas Morning News as a general assignment reporter. In 1990, after covering Nelson Mandela’s U.S. tour, Blackistone moved to the sports page, where over the next 16 years, he covered the Summer Olympics, Super Bowl, Wimbledon, the World Cup, the Tour de France, the British Open, the NBA Finals, Final Four, national college football championship, NFL playoffs, Major League Baseball playoffs, world championship boxing matches and other events more than once.