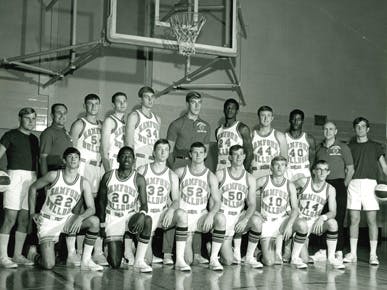 Watch any major college sporting event these days, and you’re almost guaranteed to see at least one African-American face competing, if not a majority. It’s so commonplace these days, no one even thinks about it anymore. But that wasn’t always the case.

Can you imagine Auburn beating Oregon in the BCS Title game in 2010 without Cam Newton under center? Or John Calipari winning a championship with no Anthony Davis, Michael Kidd-Gilchrest or any other player you can name from last season’s championship crew. Or what would Dean Smith’s legacy look like without players like Phil Ford, James Worthy and Michael Jordan?

For much of the 20th century, colleges from the Southwest to the Mid-Atlantic competed in an athletic world that was devoid of any diversity. That list includes perennial powerhouse programs Alabama and Florida of the Southeastern Conference and Atlantic Coast Conference schools from South Carolina to Maryland.

In those days, not only were Black athletes not allowed to compete for these institutions, they were prohibited from even competing against them. These so-called “gentlemen’s agreements” meant that even schools who did offer opportunities to African-Americans would keep them off the field of play against Southern teams that refused to compete against those student-athletes. According to Lane Dumas, author of “Integrating the Gridiron: Black Civil Rights and American College Football,” this was by no means a secret.

“White and Black sportswriters referenced it routinely (as did administrators),” Dumas said in 2010. “And any casual football fan could easily read about the role of race in negotiations between major college teams and the scheduling of games.”

These agreements were pretty much universally accepted for the first half of the 20th century. The writing on the wall came in the form of the landmark Brown v. Board of Education decision of 1954, but those Southern institutions of higher education fought fervently over the next decade and a half to stem the approaching tide. But little by little, things began to change.

In 1963, just months after James Meredith needed 500 U.S. marshals to enter the University of Mississippi, Mississippi State found itself matched up against a Loyola team that started four Black players in an NCAA Tournament game. The previous year, the school had opted out of the tournament in an effort to avoid having this type of dilemma. That season, however, coach Babe McCarthy decided to give his team a chance at a national title.

Instead of winning praise for his willingness to compete, McCarthy was met by opposition virtually everywhere he turned, including the governor’s office. The Bulldogs were forced to sneak up to Michigan in the middle of the night after a judge issued an injunction prohibiting the team from making the trip, at Gov. Ross Barnett’s request.

Loyola would go on to win the game, and eventually the national championship, but it was clear that things were changing. Southern schools would have to decide what was more important: keeping up with tradition or recruiting the best athletes available. By the late 1960s, Black athletes like North Carolina basketball star Charlie Scott began popping up at schools below the Mason-Dixon line, but, still, some schools refused to budge from their outdated stances—at least until it began to hurt their programs.

Kentucky’s Adolph Rupp was one of college basketball’s first big name coaches, winning four NCAA championships and ending his career with the most all-time wins by a head coach. Yet Rupp is probably best remembered as the coach of the lily-white team that lost to a Texas Western squad that boldly started five Black players in the 1966 NCAA Tournament. Still, Rupp’s squads remained all-White until he signed Tom Payne in 1969.

The football equivalent of that Kentucky-Texas Western game took place on a hot September day in Tuscaloosa, Ala. The University of Southern California, led by a Black quarterback and running back, marched into Dixie and came out with a win over Alabama coach Bear Bryant’s all-White football team. Many analysts considered the loss the catalyst for Bryant’s later recruitment of Black athletes.

“The game dramatically underlined the point that, if Southern schools, for whom football was so important, wanted to compete at the highest level, they would have to change,” Dr. Richard Lapchick told The Los Angeles Times in 2000.

Progression would come rapidly in the next decade. By the 1980s, Black athletes like Auburn’s Bo Jackson and Georgia’s Herschel Walker would become marquee players from schools that would not have even played against them 20 years earlier. The combination of civil rights struggles and the desire to win have given Black athletes possibilities that their ancestors would have been denied, and helped spread diversity both on and off the field of play.