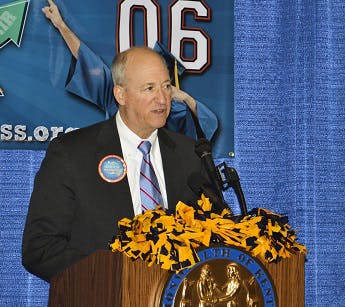 Robert King, president of the Kentucky’s Council on Postsecondary Education, says the event helps “give students an easy way to learn about as many different four-year institutions as they are anxious to explore.”

Kentuckians typically have state teams to root for during March Madness when the NCAA convenes national championship tournaments in men’s and women’s Division I college basketball. However, this year, Kentucky-based madness gets underway before the tournaments.

On March 6, Kentucky higher education officials are offering community and technical college students the opportunity to participate in ‘Transfer Madness’ — an online college transfer fair designed to help participants learn about admissions and enrollment in the state’s four-year institutions. During the college fair, students will be able to chat online with transfer advisors, watch live video presentations, research financial aid and scholarships and download materials.

“We want to use this event, or a series of events, to give students an easy way to learn about as many different four-year institutions as they are anxious to explore,” says Robert L. King, president of the state’s Council on Postsecondary Education (CPE).

Transfer Madness will be “the first entirely online, statewide transfer fair” where students will be able to have their questions answered at a “time that suits their family and work schedules,” according to a Kentucky higher education statement. Twenty-six schools, including public, private and for-profit colleges, and seven partner organizations will participate in the fair.

While officials are touting the day-long event — scheduled from 10 a.m. to 10 p.m. EST — as a showcase for innovative and efficient digital technology, they are also calling attention to how the state has aligned courses at two-year schools to seamlessly meet the standards of Kentucky’s four-year colleges and universities.

King explains that in recent years, executive and legislative mandates had put Kentucky on a course to develop a seamless path from the state’s community and technical colleges to the four-year institution. “Going back to 2009 when I first arrived, one of the things that legislators I met with repeatedly said to me was that they were concerned that transfer, particularly of credits, was too difficult,” he explains.

The state “began a very intensive effort with the chief academic officers at the community and technical college system, as well as with all the provosts from the four-year public institutions” to create “what we hoped would be a fairly perfect alignment between courses that a student would take to earn an associate of arts or an associate of science degree at a community and technical college and courses that a student might take in the same disciplines at a four-year institution in [his or her] freshman or sophomore year,” King says.

Kentucky officials say that Transfer Madness supports the CPE’s Stronger by Degrees strategic plan, which aims to improve the quality of the state’s workforce by increasing the number of students who transfer from the Kentucky Community and Technical College System (KCTCS) colleges to four-year schools. Officials also cite that a goal of state’s 2010 landmark transfer legislation, or House Bill 160, is to eliminate the barriers students confront when seeking to transfer to a four-year school, and one of the barriers is a lack of information between students and transferring institutions.

“We’re now in a position to be able to broadly and actively encourage folks who are engaged in our associate degree-level programs at the community and technical colleges to seriously consider going beyond that and earning a bachelor’s degree,” King says.

Terri Giltner, the director of KCTCS marketing, says that the schools are expected to have at least three transfer advisors participating in the online college transfer fair to answer questions from students. “The majority [of schools] are going to staff the fair all 12 hours. I know we’re doing that at KCTCS,” she says.

“This is the first time we’ve had a statewide effort where we have everybody involved and committed to focus on transfer… and that is significant, I think,” Giltner notes. “We don’t know how many students will participate, but we expect to make the online transfer fair something we will continue in the future.”