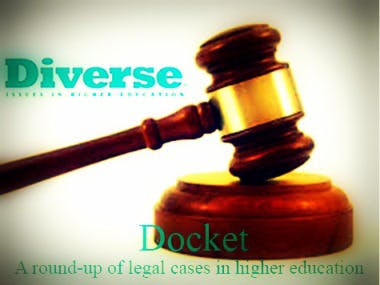 A round-up of legal cases in higher education

A federal judge has thrown out a race and gender discrimination suit by a White man who was terminated as Chicago State University’s human resources director.

Stephen Hosick also failed to show that the decision to terminate him in 2009 came in retaliation for filing complaints against the university about personnel matters, U.S. District Judge John Lee held.

According to the decision, CSU’s interim president hired Hosick in 2008 when the university was in dire financial straits due to mismanagement. It was under legislative scrutiny at the time, and the board of trustees was taking on a much more aggressive oversight role.

After the board chose a new permanent president, CSU terminated Hosick and five other administrators in a move intended to give the new president flexibility in selecting his own staff. All the others who lost their jobs were African-American: two men and three women.

The university argued that the board believed one of the incoming president’s priorities would be recruiting and organizing his staff, but Hosick’s Title VII and Illinois civil rights law claims contended that such a rationale was pretextual.

Lee sided with the university, saying that “Hosick provides no basis, not even his own personal observations, for the facts he asserts about CSU’s racial makeup, history or hiring preferences.”

For example, Lee said there was no statistical analysis to create “an inference of discrimination” based on race, nor does the board’s all-Black or almost all-Black composition create such an inference. As for the gender bias claim, Hosick “provides no explanation or analysis as to who or how CNS discriminated against him” because he is male, other than the fact that a woman replaced him.

Lawyers on both sides did not respond to requests for comment.

Quinnipiac Not In Line With Title IX

The Quinnipiac University athletic program remains out of compliance with Title IX, according to a federal judge in Bridgeport, Conn. He refused the university’s request to lift an injunction that bars discrimination and requires continuation of its NCAA Division 1 women’s volleyball team.

U.S. District Judge Stefan Underhill granted the injunction in June 2010 in a suit filed by the coach and players on the volleyball team, which was targeted for elimination.

In the latest stage of the litigation, Quinnipiac contended that changes in its athletic program since then brought the university into “statistical compliance with Title IX.” It cited creation of a women’s golf team with scholarships and off-campus recruiting; upgrading of the competitive cheerleading program to women’s acrobatics and tumbling; sponsorship of a new women’s rugby team; and continuation of women’s cross-country, indoor track and outdoor track teams.

Quinnipiac has made “a good faith, if at times misguided, attempt to comply with the injunction,” Underhill said, but still “has shown neither a significant change in its allocation of athletic opportunities, nor that inequity would result from continued enforcement of the injunction.”

While the golf team “appears to enjoy all the trappings of a varsity sport,” acrobatics and tumbling is unrecognized by the NCAA and its chances of qualifying as an “emerging sport in the foreseeable future have dimmed considerably since 2010,” he said. Although the NCAA recognizes women’s rugby as an “emerging sport,” only four other colleges nationally—and none in its own conference—have teams, so Quinnipiac plays primarily club rather than varsity opponents.

As for track, Underhill questioned the university’s method of counting athletes who belong to more than one of the three women’s teams, including some who didn’t compete during the regular season because of injuries.

He also noted that the university’s principal reason for wanting to drop the women’s volleyball team is to free practice space for other activities, an aim he said could be achieved by practicing off-campus, as Quinnipiac does with golf and track.

The university declined to discuss additional changes in its athletic program or a possible appeal, but in a statement, Vice President for Public Affairs Lynn Bushnell said, “We are naturally disappointed with the ruling, but the university remains committed to its long standing plans to continue expanding opportunities in women’s athletics.”

U. of Miami Student’s Unethical Behavior, Not Race Resulted in Ejection

A former student didn’t persuade a federal appeals panel that the University of Miami ousted him from its doctoral and medical programs because of racial discrimination.

Sanjeev Sirpal didn’t demonstrate that the university’s decision to remove him from its joint M.D.-Ph.D. program was a pretext for discrimination, the 11th Circuit U.S. Court of Appeals ruled.

Sirpal, who is Indian-American, was accused of misconduct and unethical behavior in the lab where he worked after questions arose about the source of data he used in an article co-authored by a faculty member, according to the court.

His brief, which he wrote himself, attributed the situation to “the jealously, evilness and discriminatory animus of several individuals.” The university denied liability.

In its unanimous decision, the appeals court found no direct or circumstantial evidence to support the allegation of bias, and it noted that Sirpal had the opportunity to testify at independent hearings of both the medical and graduate schools before his dismissal from the programs.

The court also rejected claims for breach of contract and defamation.