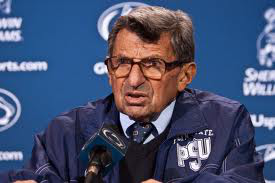 The lawsuit brought by the family of the late Joe Paterno, Penn State’s longtime football coach, and others, seeks to void a consent decree between the NCAA and the university over handling of the Jerry Sandusky child sex abuse scandal.

HARRISBURG, Pa. ― Penn State University has to become involved in a lawsuit filed by Joe Paterno’s family and others against the NCAA in order for parts of it to proceed, a state judge ruled Tuesday.

The 25-page opinion by Judge John Leete delivered a mixed decision by dismissing some elements, keeping others alive and leaving the door open for an amended lawsuit to be filed.

Leete said breach of contract claims, however, cannot continue without Penn State’s participation because the school is an “indispensable party,” given that the lawsuit could affect the university’s interests and contractual rights.

The lawsuit seeks to void a consent decree between the NCAA and Penn State over handling of the Jerry Sandusky child sex abuse scandal, an agreement that imposed a $60 million fine, a four-year ban on postseason play, a reduction in scholarships and other penalties.

“If the consent decree is declared void, as plaintiffs request, Penn State would lose the benefits it bargained for, including avoiding harsher sanctions and limiting further loss that could result from a prolonged investigation,” Leete wrote. He added that the NCAA had indicated earlier that the football program could be shut down if the decree was invalidated.

Paterno family attorney Wick Sollers said the decision allows the critical claims in the lawsuit to go forward. The ruling will let “the bright light of legal discovery” shine on the facts and records, he said.

Paterno died in 2012, weeks after the scandal erupted and he was fired as football coach.

The NCAA said it was reviewing the decision, and a Penn State spokesman declined to comment.

The judge threw out a claim of interference with contractual relations but kept in place civil conspiracy and commercial disparagement elements.

“Plaintiffs identified disparaging statements accusing Joe Paterno of enabling and concealing child sexual abuse and knowledge or reckless disregard with respect to their falsity,” Leete wrote. He said that although the family did not meet a legal standard generally required in disparagement claims, the requirement is lifted when the disparaging statements are libelous.