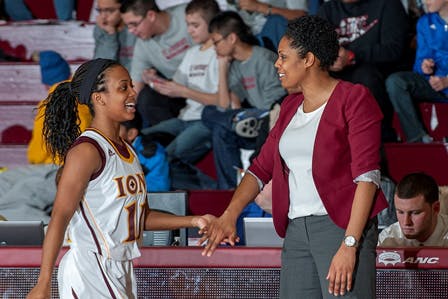 In her freshman year on the women’s basketball team at Hofstra University, Billi Godsey fractured her shin. After surgery to implant a titanium rod, she was assured the bone would not break again. She went on to excel on the hardwood during her sophomore and junior years.

In her senior year, Godsey was excited about working with the team’s new coach, Felisha Legette-Jack. But two months into the season, Godsey’s shin fractured again—bringing an end to her playing days. Instead of letting Godsey sit idle on the sidelines, Legette-Jack used the remainder of the season to teach Godsey—who had an interest in coaching since childhood—about what went into being a coach.

“I was allowed to come into the basketball offices during the day and watch film, break it down with them and see how the coaching staff worked,” Godsey recalls. “For her to bring me into that …, it impacted me and made me really, truly understand that [coaching] is what I wanted to do.

“So much more goes into the mentoring of young women than just putting them in the right spots on the court,” Godsey adds. “There’s so much thought and effort that goes into it.”

Legette-Jack’s mentorship put Godsey, 32, on a path that in 10 short years led her to become head coach of a Division I program. In May 2013, Godsey was named head women’s basketball coach at Iona College, making her one of a relatively small but emerging group of young women of color becoming head coaches.

According to NCAA data for the 2012-13 season, of the 323 programs (HBCUs excluded) in Division I women’s college basketball, there were 193 female coaches, 35 of whom were African-American.

“I’ve had young girls come up and say that coaching is their dream,” Godsey notes. “To be able to impact them in that way and to show that it can be done … it’s exciting for me to be able to represent that. I feel honored to be the head coach and to represent women of color and to continue to work hard and mentor young women of all ethnicities.”

Godsey grew up in Cheverly, Md., the second oldest of six girls, all of whom were athletic. Their father coached them in basketball when they were children, and, as Godsey grew, she took over coaching her younger siblings.

After graduating from Hofstra in 2003 with a bachelor’s in psychology, Godsey went on to earn a master’s in psychology from Adelphi University in 2005. Her first coaching job was at a Division II institution, Molloy College, where she held several positions, including assistant coach, associate director of athletics, senior woman administrator and compliance officer. The multitasking at a Division II institution provided insight into how an athletic program runs.

After Molloy, Godsey moved to Division I as assistant coach and recruiting coordinator at UMBC for three seasons, and then as an assistant coach at Virginia Tech for two seasons. She thoroughly enjoyed working with head coach Dennis Wolff and was in no rush to leave, but when the job at Iona became available, she applied.

“Working with young women, it’s not just ball [on] the court,” says Godsey, who uses her psychology background on a daily basis. “They need to have trust in you [and] have faith in you that you’re there to support them through anything that they’re going through on and off the court. It’s helped me to try to understand how to approach student-athletes in different ways and how to be there for them and to help see them through some of the experiences that they are going through.”

Psychology also helps Godsey assess players for more than their offensive and defensive prowess. When recruiting players, Godsey and her staff watch games and observe how players interact with their teammates and even listen to what their parents shout from the stands.

“I don’t want drama in my program,” she says. “Sometimes you have to let one of the better kids go, but we’re very fortunate to have our top players really be the ones who are the hardest workers setting the example for the younger kids.”

Godsey highly praises Damika Martinez, who earned First-Team All-MAAC conference honors, for being a player who makes everyone around her better. She’s also thrilled that point guard Haley D’Angelo has been selected to participate in the Women’s Basketball Coaches Association “So You Want to Be a Coach” program.