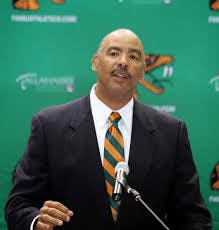 FAMU Director of Athletics Kellen Winslow, Sr., is overseeing a men’s basketball program with a multiyear APR score was 900 and football program at 885, both falling short of the 910 benchmark set by the NCAA for limited resource institutions.

INDIANAPOLIS ― The money gap at Division I colleges is continuing to show up on the playing fields and in the classrooms.

Thirty-six teams will be banned from the 2014-15 postseason because of sub-par scores on the newest Academic Progress Rate, which was released Wednesday. Not one of them comes from a power conference. And of the 17 football and men’s basketball teams, eight are from historically Black colleges and universities. Alabama State and Florida A&M made the list in both sports.

Even the NCAA recognizes the disparity now.

“While the low-resource institutions are overrepresented among the population (postseason bans) we’re talking about today, they’ve made improvement, they’ve made significant improvement as a group,” said Walter Harrison, chairman of the NCAA’s committee on academic performance. “They’re just starting at a lower spot. We’re trying to help them with some advice and some financing.”

The NCAA has awarded approximately $4.3 million over the last three years to low-resource schools, defined as those ranking in the bottom 15 percent in funding. The money is intended to help fund extra tutoring or other academic resources that could help keep student-athletes on track to graduate.

There has been a payoff.

HBCUs and low-resource institutions have seen a 15-point improvement in one-year APR scores over the past three years, from 947 to 962, and their four-year average has risen 23 points, from 930 to 953, in the last three annual reports.

The hardest hit league was the Southwestern Athletic Conference.

Five of the league’s 10 football teams could be banned from the postseason. Alabama State, Arkansas-Pine Bluff, Mississippi Valley State and Prairie View A&M all made the NCAA list. All of Southern University’s athletic teams have been ineligible for postseason play since Dec. 2 because of questions about the school’s APR data. NCAA spokeswoman Michelle Hosick said Southern was not included on the banned list because the school’s teams could still regain their eligibility, pending a review.

“We’ve seen APR scores of HBCUs and low-resource schools improving, so we feel good about that,” NCAA President Mark Emmert said. “But you never feel good about restricting postseason play.”

Kellen Winslow, Sr., FAMU director of athletics, said his school is “implementing APR improvement plans that have been recognized and approved by the NCAA. This demonstrates that we have identified critical issues and initiatives with measurable goals, including specific steps to achieve those goals.”

When broken down, the five power conferences ― the ACC, Big Ten, Big 12, Pac-12 and SEC ― have outperformed all other Division I leagues by at least four points in every one-year measurement since 2007-08. And teams in those five leagues have cut the percentage of teams falling below the 930 cutline that trigger penalties from 6 percent to 3 percent over the last two years. The percentage of teams in all other conferences, meanwhile, stands at 8 percent. Two years ago, the non-power conferences schools had 11 percent of teams below 930.

And while 9 percent of FBS teams haven’t hit 930, 16 percent of FCS teams are below the mark.

That means even more teams from smaller conferences could be in jeopardy of postseason bans when next year’s numbers are released.

While acknowledging money disparities as well as the difference in school goals, Emmert pointed out that the UConn men’s basketball team proved all teams are capable of making the grade. Two years ago, UConn was banned because of poor APR scores. This year, the Huskies had a perfect score and won the national championship.

“I think they were the only BCS basketball team to miss that mark the first time out,” Emmert said. “But I think when everybody recognizes what the real task is (academics), they can buckle down and they can get it done.”

Overall four-year APR scores, which cover the years 2009-10 through 2012-13, went up 2 points to 976. The four most-watched college sports ― baseball, football, and men’s and women’s basketball ― all showed improvement over last year’s four-year average. Men’s basketball made the biggest jump, from 952 to 957.