NCAA’s Smaller Schools Hope They Don’t Get Left Behind 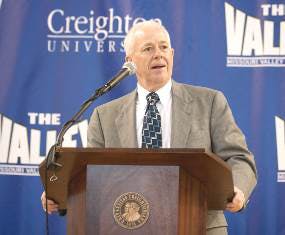 Creighton athletic director Bruce Rasmussen says the NCAA doesn’t need as much reform as is being proposed.

Boise State has proven that it can compete with the elite of college football. Schools like Butler and VCU have shown they can beat teams from the biggest conferences during March Madness. Officials at such schools are worried that we’ll never see those underdog stories again.

They worry that changes being proposed by the five major conferences could prevent them from competing head-to-head against power schools and create even greater inequities between the largest athletic programs and those trying to keep up.

“I think the NCAA in some areas doesn’t need as much change as some people are thinking,” said Bruce Rasmussen, athletic director at Creighton University in Nebraska. “We don’t need to blow the system up.”

The schools that may get left behind in what could be a seismic shift in major college athletics aren’t quite sure what to make of it all.

If they match all or some of the extra benefits the 65 big schools may soon offer, the costs could stretch already thin athletic department budgets. If they don’t, they may risk becoming second-class athletic programs with teams that can’t compete at the highest levels.

“Do we start picking and choosing some of the things? Well, let’s go ahead and give the stipend but not give the travel for the parents. Let’s do unlimited meals and snacks, but not do this,” said Central Arkansas athletic director Brad Teague, whose school is a member of the Southland Conference. “Several in our conference might pick some, several may pick others, but it really boils down to what does the recruit want? Well, this school’s giving me this. What about you all?”

Among the proposals advanced by Pac-12 presidents that will likely be matched by smaller schools are liberalization of transfer rules, cutbacks in practice time and giving athletes a greater voice with conferences and the NCAA.

But others ― such as guaranteed scholarships and stipends to more fully match the cost of going to school ― could be budget breakers for schools that don’t share in the millions of dollars in television revenues the big conferences get.

“The difference with the 65 is that most of those reforms, they’ll be able to pay for with new money coming in from television deals. And there’s no new money coming in for the rest of us outside of the 65,” said Northern Iowa athletic director Troy Dannen. “So it’s going to be a matter of reallocate, and it’ll force us to probably prioritize some things a little bit differently.”

That could mean less money to smaller sports so schools can support football and basketball programs. It will almost surely mean the gap between schools with big money programs and those on the fringe will grow even wider.

Some aren’t even sure that the NCAA and the big conferences are even concerned about athletes when talking about reform. Boise State president Bob Kustra argued in an op-ed sent to various media outlets last week that adding new benefits for athletes in the big conferences only serves to make them look more like professional leagues and will lead to larger and larger athletic budgets.

“The NCAA cannot fall prey to phony arguments about student welfare when the real goal of some of these so-called reformers is to create a plutocracy of athletic programs that serves no useful purpose in American higher education,” Kustra wrote.

Like it or not, though, change is on the way. The large conferences have a sense of urgency heightened by the attempt to form a union of Northwestern football players and the lawsuit by former UCLA basketball star Ed O’Bannon seeking an injunction against NCAA regulations scheduled to start June 9.

“We acknowledge the core objectives could prove to be expensive and controversial, but the risks of inaction or moving too slowly are far greater,” the letter reads.

Some among the smaller schools worry that the best players will go to the schools that offer the most money and benefits, particularly among the 126 schools that compete at the Football Bowl Subdivision level. Others, though, say the effect will be minimal because the biggest schools are already getting the best players anyway.

“The world’s not going to end here. You can only build so many waterfalls in your locker rooms,” said Mid-American Conference commissioner Dr. Jon Steinbrecher. “There are lots of challenges. I don’t want to in any way say that there’s not. But, you know what, we’re going to keep doing what we’re doing.”

Indeed, even as the president of Boise State worries about the arms race in college sports, the school’s athletic department is adjusting. Last week the university sold the rights to name the football stadium to the grocery chain Albertson’s for $12.5 million, and the hope in Boise is that the football team can not only win the Mountain West Conference, but continue to compete for big bowl games.

“The largest budgets don’t necessarily correlate to the most wins,” said Boise State AD Mark Coyle. “I’m excited we’re starting to focus on the student-athletes because for the last four or five years the topic has been conference alignment, not student-athletes. We’re still fully committed to compete at the highest levels even as these changes are made.”