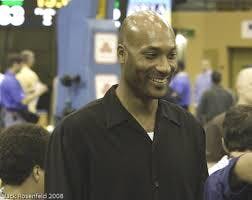 d O’Bannon, who is the lead plaintiff in an antitrust suit against the NCAA, said Monday, “I was an athlete masquerading as a student.”

OAKLAND, Calif. ― The battle to give top football and basketball players a cut of the billions of dollars flowing into college athletics began in earnest Monday with former UCLA basketball star Ed O’Bannon taking the stand in federal court to describe how he spent long hours working on his game and as few as possible on his grades.

The lead plaintiff in a landmark antitrust suit against the NCAA said his goal at UCLA wasn’t to get a degree, but to get two years of college experience before being drafted into the NBA.

“I was an athlete masquerading as a student,” O’Bannon said. “I was there strictly to play basketball. I did basically the minimum to make sure I kept my eligibility academically so I could continue to play.”

O’Bannon portrayed himself as a dedicated athlete who would stay after games to work on his shot if he played poorly, but an indifferent student at best. His job at UCLA, he said, was to play basketball and took up so much time that just making it to class a few hours a day was difficult.

O’Bannon, who led UCLA to a national championship in 1995, said he spent 40 to 45 hours a week either preparing for games or playing them, and only about 12 hours a week on his studies. He changed his major from communications to U.S. history after an academic adviser suggested it would be the easiest fit for his basketball schedule.

“There were classes I took that were not easy classes but they fit my basketball schedule so I could make it to basketball practice,” O’Bannon said.

The testimony came as a trial that could upend the way college sports are regulated opened, five years after the suit was filed. O’Bannon and 19 other plaintiffs are asking U.S. District Judge Claudia Wilken for an injunction that would allow athletes to sell the rights to their own images in television broadcasts and rebroadcasts.

If successful, the plaintiffs in the class-action case ― who are not asking for individual damages ― could pave the way for a system that uses some of the huge money flowing into television contracts to pay athletes for their play once they are done with their college careers.

As the trial began, the NCAA announced it had reached a $20 million settlement in a related case involving videogames that used the likeness and images of players without getting their permission. NCAA attorney Donald Remy acknowledged that the settlement in a suit brought by former Arizona State and Nebraska quarterback Sam Keller will result in some current players getting money but doesn’t change the NCAA’s strong belief that the collegiate athletic model is lawful.

“Consistent with the terms of a court-approved settlement, the NCAA will allow a blanket eligibility waiver for any currently enrolled student-athletes who receive funds connected with the settlement,” Remy said. “In no event do we consider this settlement pay for athletics performance.”

O’Bannon, who joined the lawsuit that carries his name after seeing his image used in a NCAA-branded videogame, said he signed a letter of intent that he never read as a 17-year-old eager to display his skills at UCLA. He ended up spending five years at the school, but was seven courses short of graduating when he was drafted into the NBA.

He spent two years in the NBA and another seven playing professionally in Europe. He now lives in a Las Vegas suburb, where he makes his living selling cars.

O’Bannon acknowledged getting benefits from his time at UCLA, including a free education and room and board. He also met his wife at school, and enjoyed his relationship with coach Jim Harrick and the late John Wooden.

“Everyone who came in contact with (Wooden) loved him,” O’Bannon said. “I was envious personally that I was born a little bit too late. I wished I could have played for him, he’s that kind of man.”

But under cross-examination, O’Bannon said he believed athletes should share in some of the money that schools are making off their efforts on the court and field.

“If they are generating revenue for their school, I believe they should be compensated at some point,” he said.