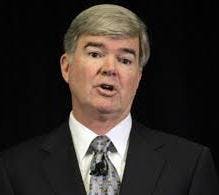 OAKLAND, Calif. ― NCAA President Mark Emmert stuck to his contention that amateurism is the core of college athletics, saying any effort to pay players would destroy a framework that has been in place for more than a century and cause many schools to either abandon sports or refuse to play other schools that do pay.

Emmert said college athletes themselves wouldn’t want to play against other athletes who were getting paid.

Emmert took the witness stand Thursday in a landmark antitrust trial against the NCAA to say college sports would be fatally flawed if players were allowed to receive a portion of the billions of dollars in basketball and football television revenues now flowing into big conferences and colleges.

Emmert said one of the biggest reasons fans like college sports is that they believe the athletes are really students who play for a love of the sport and for their school and community. He said fans understand college players aren’t as good as professionals, but that doesn’t stop some programs from being more popular than professional teams.

“To convert college sports into professional sports would be tantamount to converting it into minor league sports,” Emmert said. “And we know that in the U.S. minor league sports aren’t very successful either for fan support or for the fan experience.”

Emmert’s testimony came in a much-anticipated appearance as the NCAA tries to convince U.S. District Judge Claudia Wilken that its system of so-called amateurism is not anti-competitive and is the best model for regulating college sports.

Watching closely from the plaintiff’s table was former UCLA basketball star Ed O’Bannon, who along with 19 other former players is seeking an injunction that would allow players to band together and sell the rights to their names, images and likenesses (NILs) in broadcasts and video games. O’Bannon testified on the first day of the trial last week that he went to UCLA to play basketball and that he was a student grudgingly at best.

The lawsuit and other efforts targeting the NCAA have already had some effect, with the biggest five conferences moving quickly toward giving athletes more money and benefits. Emmert said he supported those moves, but said giving athletes more than the true cost of attendance would cause a free-for-all in recruiting and force many schools to give up smaller sports.

Many schools, he said, would simply leave Division I sports rather than pay their players.

Under friendly questioning by an NCAA attorney, Emmert defended the concept of amateurism, which he said has been a core principle from the time the NCAA was founded in 1905 to today.

“It’s one of the most fundamental principles of the NCAA and intercollegiate athletics,” Emmert said. “They have always seen and assumed that intercollegiate athletics is about the notion that these are members of the student body. They’re not hired employees conducting games for entertainment. They’re not a random group of folks that just come together to play sports.”

Emmert’s appearance drew an overflow crowd to Wilken’s courtroom as the NCAA sought to rebut earlier contentions by witnesses for the plaintiffs that the organization’s rules on amateurism are anti-competitive and that almost everyone connected with college sports makes money except athletes.

Emmert acknowledged under sometimes contentious cross examination that many people are professionals because they make money in college sports, but said that is no different than other amateur sports. The NCAA president—who himself makes $1.6 million a year—drew a distinction between coaches making millions of dollars a year and athletes who receive only tuition and room and board for their services.

“The pay to a professional coach is very different than the nature of the student-athlete’s relationship to the university,” Emmert said. “The coach has been a paid individual as long as there have been paid coaches and student-athletes are amateurs. The fact coaches are getting paid more doesn’t change those relationships at all.”

O’Bannon and others are asking for a ruling that would give basketball and football players the right to seek a share of revenues from their sports for use of their names, images and likenesses (NILs) in broadcasts and videogames. A broad outline of a plan sketched by the plaintiffs would give players equal shares for each year they play, with the money paid only after an athlete leaves college.

Emmert, a former university president who has headed the NCAA for nearly four years, said even deferred payments would be in direct violations of NCAA rules first crafted in 1905 that forbid giving money to players.

“It’s still the same,” he said. “It’s pay for playing, regardless of whether it’s paid today or paid tomorrow.”

Emmert said if some schools paid their players for their NILs and others didn’t it would create such an uneven playing field among schools there would likely be no national championships in football and basketball.

“Direct payment as an inducement (to recruits) is obviously fundamentally different than to say you’re going to be in this locker room or that stadium,” he said. “Member schools would certainly find that an uncompetitive situation and wouldn’t want to be a part of a championship that is driven by that.”

He acknowledged, though, that there is a lot of debate within the NCAA and its 1,100 member schools over how far universities can go in chasing money for athletic programs. Emmert said he himself ordered the cancellation of an NCAA videogame because there was a dispute over whether player NILs were being used in it. The NCAA settled a lawsuit over the use of NILs in the EA game for $20 million on the eve of the trial.