College Athletic Recruiting: Next Promise Could Be a Paycheck 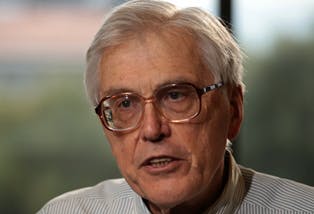 Stanford economics professor Roger Noll testified that paying athletes more than they already are receiving would not violate the concept of amateurism.OAKLAND, Calif. ― They come calling with promises of a good education, a chance to play on television and some of the best facilities that money can buy.

There may come a time, though, when recruiters chasing the best high school football and basketball players offer something else: a nice paycheck to take with them as a parting gift when their college days are over.

Football players could get several hundred thousand dollars. Basketball players would do even better, perhaps becoming millionaires even if they never play a day in the NBA. Under some scenarios they could take the payments in lieu of what they would have gotten for tuition and room and board. They would be college employees of a sort, able to take classes if they wish or simply play sports.

And the NCAA might still be able to take the high road and continue to run big-time college sports as “amateur” programs.

“There’s nothing inherent in the word amateurism that says increasing substantially the amount paid athletes would violate the principle of amateurism,” said Stanford economics professor Roger Noll, who testified on behalf of the plaintiffs. “There’s no reason to believe that.”

It’s all theoretical, of course, based on models that may never come into play. But just what the future of big-time college athletics may look like if the NCAA loses a landmark antitrust suit is beginning to come into focus as attorneys representing former UCLA basketball star Ed O’Bannon and others press their case in a federal court trial.

No one expects the current system run by the NCAA to be completely blown up. But at a time when billions of dollars are flowing into college sports, there is little dispute that players will get a bigger chunk of the pie.

That may come as soon as next year, when the five major conferences move to separate themselves from football programs that aren’t nearly as profitable and give athletes more money and greater benefits. Among the proposals is more money to cover the full cost of attending school and better medical and travel benefits.

Whether the extra money will amount to covering laundry expenses and date nights or comes to a much larger payment may depend on how successful O’Bannon’s attorneys are in winning a ruling that the NCAA is acting illegally by not allowing players to profit off the use of their names, images and likenesses in television broadcasts and videogames.

If the plaintiffs win, lawyers have hinted in broad terms how they see college sports changing. The NCAA would still run athletics, but Division I basketball and Bowl Subdivision football players would be allowed to band together to seek payment for the use of their names and images in television broadcasts and videogames. Those payments would go into a trust fund, with players getting equal shares when they leave school.

University of San Francisco economics professor Daniel Rascher testified that using something akin to the professional model ― where players get something close to the 55 percent of broadcast revenues NFL players currently receive ― a football player at Vanderbilt might get $325,000 over a five-year period because of the lucrative television contracts in the Southeastern Conference.

A basketball player at a Pac-12 school like Oregon, he said, would do even better, perhaps walking away with more than $1 million by the time his career is over because there are fewer teammates with whom to split the money.

If players are allowed to be paid ― even if that money is put in a trust to be given out only when they leave school ― coaches and other recruiters would surely begin emphasizing how much an athlete might look forward to at the end of his college career. The money would be doled out to each player equally, but that doesn’t mean every school would offer the same amount.

Some smaller conferences may refuse to offer anything at all, believing the concept of amateurism is too important to lose. But at the top levels of college sports it’s hard to imagine schools not joining in and risking the loss of the best recruits.

“It would pain me greatly as a university president and I would try to protest that but we would probably continue to compete in football and basketball,” University of South Carolina President Harris Pastides testified. “I think our fans and board of trustees would probably replace me if I decided to drop out of that type of competition.”

NCAA attorneys have suggested paying athletes would lead to a competitive imbalance, where the richer schools got all the best athletes. But Rascher said big and smaller schools rarely compete for the same athletes now and, when they do, the big schools almost always win.

Former Vanderbilt linebacker Chase Garnham testified that he would have been interested in the money had he had a choice. Garnham said it would only be natural for an athlete to go where the money is if everything else was comparable.

“If I was a recruit, that’s what I would do, yes,” Garnham said.