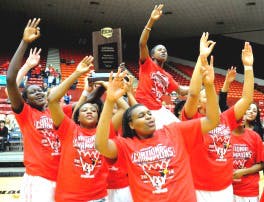 While traditional college sports fans gravitate to the courts and fields of four-year institutions, a robust world of sports-driven enthusiasm can be found on the campuses of junior colleges across the country.

For decades, junior college sports teams have been characterized as housing student-athletes who lack blue chip status because of academic or athletic deficiencies. More recently, though, the stigma is changing and smaller institutions have become nurturing environments for greater opportunities.

“Over the past five to 10 years, we have really emphasized initiatives which provide a better collegiate feel for our two-year college athletes,” says Mary Ellen Leicht, executive director of the National Junior College Athletic Association (NJCAA), which oversees and regulates eligibility requirements for more than 58,000 student-athletes at over 500 junior and community colleges in the United States. “We no longer are the place student-athletes go because they aren’t good enough in the classroom or on the field of competition.”

Due to advancements and affordability of technology, the NJCAA has been able to use their website and digital TV platforms as integral tools in highlighting the successes of community college student-athletes.

A recent nationwide acknowledgement of community colleges and its role in providing quality education and career preparation has presented Leicht with the opportunity to promote member colleges on a larger scale through championship events, awards and media publicity.

In Athens, Texas, a culture of prestige has developed around the Trinity Valley women’s basketball team, who finished the 2013-2014 season with a record of 36-1.

“Our Lady Cardinals have probably been the premier program on campus for years and it’s because of the legacy that Kurt Budke [head coach from 1993 to 2000] started,” says Elena Lovato, who has spent the last three years as head coach. “We’ve won eight national titles now.

“We definitely draw great crowds and have a lot of support behind us because we’re expected to win championships every year,” Lovato adds.

Lovato notes that one vital source of support comes from the college administration, which provides financial support by awarding 12 full scholarships to Lady Cardinal members each year.

Additionally, the community has taken part in creating a supportive environment for players.

“The kids find a second home in Athens because our community shares themselves with the kids as far as supporting them at the games, meet and greets and the community service that we do. It exposes these kids to a university basketball athletic program style,” says Lovato.

Even Division I qualifying athletes have decided to hone their skills on Trinity’s court.

“We tend to get some Division I transfers who go to a school and don’t necessarily enjoy it, or don’t like the coaching style or don’t get much playing time so they come to us in order to open up their recruitment and be on the radar for Division I opportunities again,” explains Lovato.

A sophomore at Trinity Valley, Sylvia Smith-Gatson chose to play for the Lady Cardinals because of the coaching staff and for the opportunities on a team that sends 100 percent of its players to Division I schools.

With her eyes set on Lincoln and Nebraska universities, Smith-Gatson has long-term goals of teaching a game she’s been playing since she was 9 years old.

“I just love the game, so I want to be a coach,” says the Omaha, Nebraska, native.

Coaches are undoubtedly the driving force behind the success of athletes, and  their ability to connect with players on a familiar level is essential.

“Junior college is a great situation for young people to get a good education, one-on-one help and be in smaller classrooms that you don’t have at some of the larger four-year schools — it helped me to mature and become a better person,” says Kragel.

Entering the 2013-2014 season, Kragel’s career record was 806-258; he ranked third highest-winning active coaches and fifth of all time. During the 2014 NJCAA Women’s Basketball Coaches Association All-Star Weekend July 24 to 27 at Northwest Florida State College in Niceville, Florida, Kragel will be the single inductee into the 2014 class of the NJCAA Women’s Basketball Coaches Association Hall of Fame.

“It’s a real honor to me because I’ve made my life staying here with the ladies,” he says. “It’s an opportunity for kids who want to play basketball and go on to four-year schools.”

After Southwestern, Kragel went on to earn his bachelor’s and master’s degrees at Oklahoma State University.

In Phenix City, Alabama, maintaining high achievement records in academics is equally important to Adam Thomas, head coach of the Chattahoochee Valley Pirates baseball team, which finished the 2013-2014 season with a record of 48-11.

The Pirates have earned the baseball NJCAA Academic Team of the Year award in 2007, 2008, 2010, 2012 and 2013. Eleven Pirates athletes have also earned Academic All-American status, with many others being named to the Academic All-Region team.

“We have a pretty intense academic plan,” says Thomas. “Every week and a half to two weeks, we have tutoring resources in all subjects either by a student tutor or instructor so we have those sorts of things to make sure they’re in line.”

If all else fails, Thomas has found another secret weapon for academic success among his players.

“We have the old preverbal kick in the butt from Coach Thomas if they’re not doing what they’re supposed to do, so I can motivate them that way,” he says.

Although a champion coach in academics and on the diamond, Thomas finds his biggest reward in building relationships with his players.

Thomas says “being able to mentor those guys and help develop them as young men, allowing them to be a part of my life and being a part of theirs” is his greatest award. “The championships are great and I’m glad that we’re able to have those types of tangible things, but impacting young people’s lives … I don’t know how you put a value on something like that. I really enjoy that part of it.”