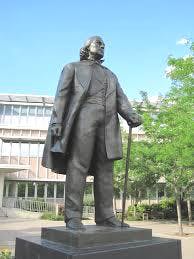 The statue of its founder on the university’s campus depicts a clean-shaven Brigham Young and that aligns with the BYU Honor Code that states that “men are expected to be clean-shaven.”PROVO, Utah ― A group of Brigham Young University students is protesting the Mormon Church-owned school’s ban on something its namesake once sported: a beard.

About 50 students, some donning paper beards, biked, skateboarded or rollerbladed their way from the Provo City Library to campus during the “Bike for Beards” protest on Friday night.

“I love BYU. I love being a student here,” protest organizer Shane Pittson said. “But the rule on beards I find particularly outdated.”

The 23-year-old international studies major and other students have launched a petition drive to get the school to lift the ban.

University spokeswoman Carri Jenkins said students agree to its grooming standards before their first day of class and the beard ban was set in place by students.

“It’s nothing against beards. It’s just how we choose to represent ourselves at the university,” she told The Salt Lake Tribune.

Brigham Young and many other early leaders of The Church of Jesus Christ of Latter-day Saints grew beards as they aged. A statue of Young in downtown Salt Lake City depicts him with a beard, but another at BYU shows him clean-shaven.

The BYU Honor Code, created in the 1940s, states that “men are expected to be clean-shaven” and beards are not acceptable. But students can be exempted from the prohibition if they have a medical condition such as scarring.

In 1971, then-university President Dallin Oaks defended the beard ban as “contemporary and pragmatic,” but he said he would be surprised if it was not eventually changed.

At the time, Oaks said beards and long hair on men were elements of “slovenly appearance” linked to “protest, revolution and rebellion against authority. They are also symbols of hippie and drug culture.”

Pittson enjoyed growing his own beard this summer, but he shaved before the protest.

“I figured it would make more of an impact to say, ‘I respect the university and here I am abiding by the rules but asking for change,’” he told The Tribune.