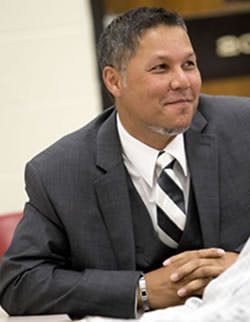 Dr. Gregory M. Anderson, dean of the College of Education at Temple University, said “the selection process should not happen before students apply.”

For many of the nation’s public universities, access to higher education for all students has become a priority as demographic data indicate that the U.S. minority population will be the majority by 2050. The new option for fall 2015 college applicants is that Temple University will no longer require Scholastic Aptitude (SAT) or American College Testing (ACT) scores for admission.

Under the new policy, applicants who do not submit test scores will be required to answer specifically designed, self-reflective short answer questions that speak to non-cognitive attributes. Prospective students can now decide for themselves if their test results accurately reflect their academic ability and success potential. To date, one-third of all new applicants selected the Temple Option.

After conducting research instrumental to the Temple Option being implemented, access challenges resonated with the dean of the College of Education at Temple, Dr. Gregory M. Anderson.

“Is this an equitable policy and are standardized test scores indicative of academic performance if non-cognitive factors have a greater predictive value of persistence and are driven by student and parental choice?” said Anderson. “The selection process should not happen before students apply.”

In comparison to peer institutions, Temple’s diversity numbers are significant but nowhere near an accurate representation of the surrounding city. Although the option is open to national applicants, Philadelphia prospective students remained the focus.

“When pulling the data, we had Philadelphia in mind,” said Anderson. “There is a strong correlation between socioeconomic status and standardized test scores. The city has a significant population of low-income, first-generation, students of color coming out of K-12. We also know that Advanced Placement (AP) tests and college prep courses are distributed by zip code, so how then can we rely on test scores? It is not an achievement gap; it is an opportunity gap.”

As the prospect of implementing the Temple Option took shape, Karin West Mormando, director of admissions at Temple, raised several questions about the prospective student applications they previously had been receiving. “Is there some other way to do this? Are we getting the right students? Are they more than just a test score? This way, students can tell their own story in their own voices and now have a variety of ways to present themselves to the university. The option also provides a much broader appeal to underrepresented students.”

The research university received a $225,000 grant last July as part of the Transformational Planning Grant project, funded by the Bill & Melinda Gates Foundation, courtesy of the Association of Public and Land-grant Universities (APLU) and the Coalition of Urban Serving Universities. Temple, one of seven institutions nationwide named in the grant project, plans to fund research dedicated to innovate recruitment strategies, increase access and improve student success rates for perspective students.

In an earlier statement, Temple University President Neil D. Theobald explained that Temple is committed to providing access for students of all backgrounds.

“We are committed to providing talented and motivated students of all backgrounds with access to a high-quality college experience and a Temple degree in four years,” Theobald said. “By giving students more choices, we open doors to more first-generation students and those from underserved communities whose enormous academic promise may be overlooked by conventional measures of achievement.”

Community colleges in Pennsylvania are also on board with the Temple Option. President Quintin B. Bullock of the Community College of Allegheny County (CCAC) in Pittsburgh praises the option.

“As universities such as Temple seek new ways to assess an individual’s readiness for college, including offering the option of being able to submit reflective narratives in lieu of SAT/ACT scores, [it] can only help to increase access to college, especially for students who may not test strongly but who are able to demonstrate academic ability in other ways” said Bullock.

Many CACC students transfer to Temple University, and the option may open the door for even more students.

“Certainly, these new ways of measuring ability have the potential to pave the way for college students from minority and other underrepresented populations—an outcome that we all strive for in higher education,” Bullock added.

Student-athletes, home-schooled students and international students who have studied in a U.S. high school for less than three years are ineligible for the Temple Option and are still required to submit standardized test scores.

“The next challenge is to have the student succeed. It is not about ability; it is about the preparation,” said Anderson.