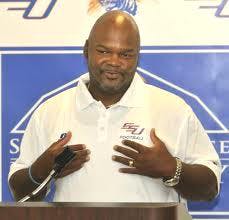 A jury found that football coach Julius Dixon and Savannah State University didn’t use race as a motivating or substantial factor in the new coach’s decision not to award a White player a scholarship.

A federal appeals court has refused to reinstate a discrimination case against Savannah State University by four White football recruits who were offered athletic scholarships by a White head coach but didn’t receive them from the coach’s Black replacement.

In 2010, Robert Wells, who is White, verbally offered scholarships to the recruits, only one of whom ― Forrest Hill ― was a Georgia resident.

SSU replaced Wells with Julius Dixon, who is Black, several weeks before national signing day when scholarships can be officially offered and accepted.

Dixon offered all the scholarships to Black recruits from Georgia who qualified for lower in-state tuition and thus cost less to the football program.

In a civil rights suit against the university, Dixon and other SSU officials, a lower court judge dismissed all claims by the three out-of-state White recruits. A jury sided with Dixon on Hill’s remaining discrimination claim, finding that race wasn’t a motivating or substantial factor in the new coach’s decision not to award Hill a scholarship.

Claims by the non-residents were properly dismissed because they were not “similarly situated” to Black Georgia residents eligible for in-state tuition, the panel said.

And although one out-of-state Black recruit with a Georgia driver’s license did receive a scholarship offer, the offer was contingent on his ability to obtain in-state residency, the court said.

Wells filed a separate reverse discrimination suit and settled with the university for $240,000 plus $110,000 in attorney fees.

An African-American applicant who was twice denied admission to a community college after refusing to take a reading assessment test has lost her racial discrimination suit.

After Erve’s second rejection, she sued the college and three of its officials, arguing that Henry Ford “violated her legal rights to obtain an education by intentionally restricting her because she openly challenged Caucasian staff in the admission office.”

Erve, who represented herself, also accused the college of maintaining a “racially hostile environment.”

In his decision, Cook said all applicants were required to take the reading assessment test. “In other words, her application was never formally denied on the merits because she failed to satisfy the prerequisites to admission.”

In addition, Cook said that even if a college official had made a racially derogative comment about the reading ability of African Americans as Erve alleged, it was insufficient to prove that the college had an intentionally discriminatory motive.

Nor was there evidence that Erve was qualified for admission or that other applicants received more favorable treatment from the college, he said.

Delaware State University has won a First Amendment, due process and whistleblower suit by a former union activist whom it had fired after a criminal conviction but rehired on an arbitrator’s orders.

U.S. District Judge Gregory Sleet found no basis to hold the university liable on claims by Michelle Thomas, a senior secretary who had been president of the AFSCME local of administrative and clerical employees.

As union president, Thomas filed grievances on behalf of AFSCME members and represented them in disputes with the university. According to Sleet, most of the grievances involved contract violations concerning such matters as work assignments, pay grades and working conditions.

In 2008, she pled guilty and was placed on unsupervised probation for touching a campus police officer during an argument about her unpaid parking tickets.

The university notified Thomas that she would be fired for making false statements during the investigation into that incident.

At a pre-termination hearing, she unsuccessfully argued that the firing was in retaliation for filing union members’ grievances.

Ultimately, an arbitrator held that the termination violated the union contract, and she was reinstated.

Ruling in the lawsuit, Sleet said the university didn’t violated Thomas’ free speech rights because the union grievances concerned only working conditions and internal personnel matters, not “matters of public concern” or “issues of interest to the broader community.”

Nor did she show that her union activity led to the termination, he said.

Next, Sleet said the pre-termination hearing complied with her right to due process of law.

As for the whistleblower allegations, he said state law covers employees who report violations that involve health, safety or environmental dangers but that there was no evidence the university fired her for reporting mold and asbestos violations.