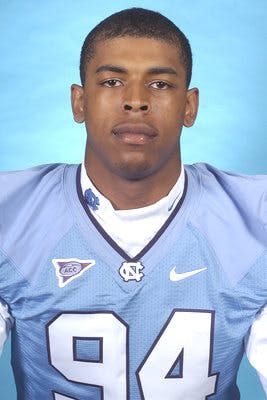 Michael McAdoo was ruled permanently ineligible in 2010 for academic violations connected to a tutor providing improper assistance on a research paper for a class in the formerly named African and Afro-American Studies department.CHARLOTTE, N.C. ― Former University of North Carolina football player Michael McAdoo has filed a lawsuit against the school, saying it failed to provide him and other athletes a quality education by guiding them toward sham classes.

McAdoo’s lawsuit says that he was guaranteed a good education while being recruited by football coaches, but was ultimately guided to consider three options, one of which was African-American Studies ― the curriculum that formed the basis for the long-running academic scandal.

“We’re not out to vilify UNC. We’re trying to restore the student-athlete principle that UNC’s really been for so long in the forefront of,” said Jeremi Duru, a Washington, D.C., attorney representing McAdoo who also teaches law at American University.

Rick White, UNC associate vice chancellor for communications and public affairs, said the school became aware of the lawsuit on Friday and will reserve comment until it has reviewed the claims.

McAdoo, who played football at UNC from 2008 through 2010, was ruled permanently ineligible in 2010 for academic violations connected to a tutor providing improper assistance on a research paper for a class in the formerly named African and Afro-American Studies department.

The lawsuit comes weeks after a report detailing the academic and athletic scandal at UNC revealed that more than 3,100 athletes and everyday students took no-show classes in the formerly named African and Afro-American Studies department for nearly two decades ending in 2011.

The report by former U.S. Justice Department official Kenneth Wainstein said those classes resulted in artificially high grades while faculty and university administrators either missed red flags or looked the other way. The report also said almost half the students enrolled in the bogus classes were athletes, more than 10 times their proportion in the overall student population. Athletics staffers steered players to the classes when they struggled to meet the grades required to continue competing.

In the lawsuit, McAdoo said UNC coaches and other representatives “enticed these football student-athletes to sign the agreements with promises of a legitimate UNC education …”

“Instead, UNC systematically funneled its football student-athletes into a ‘shadow curriculum’ of bogus courses which never met and which were designed for the sole purpose of providing enrollees high grades,” the lawsuit said. It also said the curriculum featured hundreds of courses which never met and never involved a professor and that hundreds of football student-athletes were steered to the courses.

Also, the lawsuit says UNC has reaped “substantial profits” from football players, but has not provided them with an education in return, thus breaching its contract with McAdoo and other student-athletes in violation of North Carolina law. The lawsuit also accuses the school of fraud by promising “a legitimate education” if McAdoo and others enrolled at UNC as football student-athletes.