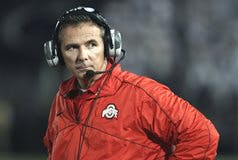 In revenue college sports, the coach is the alpha and omega, the beginning and the end. At many institutions with major football programs, the football coach is often the highest paid public official in the state.

The pressure to win means universities with top programs invest millions into ensuring they have the best state-of-the-art facilities and training staffs.

Jean Boyd, senior associate athletic director for student athlete development at Arizona State University, said Thursday at the Black Student Athlete Conference, sponsored by The University of Texas at Austin’s African American Male Research Initiative, that a lot of time and effort goes into supporting facilities, which simultaneously detracts from the focus on nurturing the student-athletes. Less than 5 percent of athletic officials’ time is spent thinking about the student-athlete, Boyd said.

With so much on the line — the coach’s own salary and job security, and the need to win to maintain the reputation of the institution and the expectations of boosters, alumni donors and corporate sponsors — the coach is under immense pressure to win at any cost. That cost, unfortunately, often is the education and well-being of the student-athletes under their tutelage.

William Rhoden, in his 2006 book, Forty Million Dollar Slaves, talked about the concept of “the conveyor belt,” which is a machine through which athletes are pushed to support the programs at the expense of their selves. In the book, Rhoden discussed that the ultimate goal of the conveyor belt is less to ready Black student-athletes to play at the collegiate level than it is to deliver them with the right mentality: don’t challenge the existing power structure.

On any campus, the existing power structure is the athletics department, most notably the coach. And, from the beginning, athletes are taught not to rear against or challenge the coach for any reason if they hope to be successful at the collegiate level.

At The Ohio State University, for example, “Coach [Urban] Meyer is their daddy,” said Dr. James Moore, associate provost in the university’s Office of Diversity and Inclusion. “And we may not say it, we may not like it,” but that is the reality of the situation for the players on OSU’s football team.

In addition to their own self-identity and need to achieve on the field for their own adulation, players are under immense pressure not to let the coaches down; some feel the coach’s job may ride on their performance.

For some who have lacked mentorship and the presence of a solid male figure for most of their lives, the relationship with the coach is invaluable. But for others, when they are no longer playing, they feel betrayed and abandoned by coaches who used them up and spit them out, without really preparing them to be productive members of society.

As others on campus try to focus on the “student” aspect, they often find themselves fighting a number of barriers. For starter, many athletes often come to campus in lower academic standing than their fellow students. To fight that deficit requires time dedicated to their studies, time they may or may not have to spare from their athletic obligations, which often run upwards of 60 hours per week (despite the NCAA-mandated 40-hour cap, according to experts).

Felicia Martin, associate athletic director for academic services at Texas Tech University, said it is often a tough balance trying to nurture athletes on campus as truly student-athletes. Between demands on their time via practice and training and travel schedules and the expectations of the athletics department, challenging the existing structure to ensure the athletes are being cared for holistically is not always without reprimand.

For many on the academic side, she said, it is tough for those in support roles to get to a place where they “feel secure enough and comfortable enough to challenge coaches.”

“You know at any given time that you disagreeing with the head coach or saying the wrong thing … could impact your job,” Martin said.

Martin believes that she enjoys some increased job security and flexibility since she reports to both the provost (on the academic side) and the athletic director. But some remain skeptical of the divergence between a true emphasis on the athletes as actual students and their treatment as human capital whose sole purpose is to help the program get the win.

“It doesn’t matter if you’re answering to the provost if the budget still comes from athletics. That’s where the money is, that’s where the control is,” said Dr. Gerald Gurney, a professor at Oklahoma University who has worked extensively with developing athletic policy at the university.

But if, for example, the athletics program in the Southeastern Conference alone netted $1.38 billion this past season, it is difficult to try to convince anyone that athletics should not be driving the bus of priorities on campus. And realistically, as long as television and corporate revenue from athletics continues to skyrocket, and as long as there is such high profitability associated with athletics programs at the major programs, the system is not likely to remove power from coaches at these major programs.