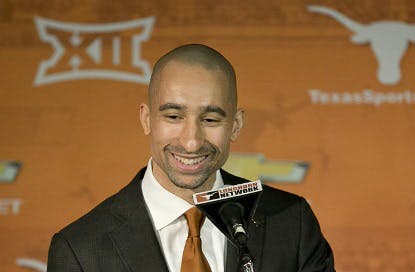 Coach Shaka Smart speaks during a news conference at the University of Texas-Austin.A group of prominent African-American college coaches, including Shaka Smart of the University of Texas and John Thompson III of Georgetown, have launched a new organization devoted to ensuring that minority coaches in men’s and women’s college basketball and college football are provided hiring and professional development opportunities.

Officials say that planning, which got underway in 2013 largely by African-American coaches of Division I men’s basketball teams, resulted in the formation of the Lansing, Mich.-based National Association of Coaching Equity and Development (NAFCED). With more than 40 charter members, the new association officially launched this past January and its presence has already helped bring media attention to the declining number of African-Americans holding head coaching positions of Division I men’s basketball teams.

Roughly 18 months ago, a group of African-American head coaches “came [together] and said ‘Black coaches don’t have a voice. Things are being done to us, about us, for us, but not by us, and that needs to change,’” said Dr. Merritt J. Norvell, the NAFCED executive director.

NAFCED was established in part to advocate on behalf of minority candidates seeking head coaching jobs. The group also plans to help groom younger coaches to succeed in those jobs and help student-athletes gain admission to and succeed in college, according to Norvell, a former athletic director at Michigan State University.

The new group is expected to fill the void left by the former Black Coaches & Administrators (BCA) organization, which during the 1990s and 2000s successfully advocated on behalf of Blacks in the college coaching and sports administrator ranks. In 2014, the NCAA absorbed the BCA and renamed it the Advocates for Athletic Equity.

By the 2005-06 season, minority coaches held a high of more than 25 percent of the men’s Division I basketball head coaching jobs. But by the 2013-14 season, the percentage had fallen to 22 percent, according to The Institute for Diversity and Ethics in Sport at the University of Central Florida. Last month, it was noted that, among the final 16 teams in the NCAA tournament, not one had a Black head coach. In addition, 12 Black head coaches in Division I men’s basketball had been fired during the 2014-15 season, according to news reports.

“The basketball coaches didn’t pay much attention to it for a long period of time before the numbers started dropping and dropping,” Richard Lapchick, director of The Institute for Diversity and Ethics in Sport (TIDES), told the Associated Press. “The formation of a coaching group that has the influence these coaches do can be very important.”

Norvell said NAFCED’s structure will revolve around three councils that cover football and men’s and women’s basketball. In addition to four-year colleges and universities, NAFCED membership is open to coaches from the high school, AAU, and community college ranks. “We want to be able to identify young high potential coaches, develop them, and continue to fill the queue with qualified coaches,” noted Norvell.

Dr. Earl Smith, a professor emeritus of sociology at Wake Forest University, said it will be important for high-profile NAFCED members to demonstrate public leadership on issues such as hiring equity and equity for student-athletes in high-revenue-producing sports. Individuals such as John Thompson, Nolan Richardson and John Chaney helped bring influence and exposure to the old BCA by their willingness to speak out on player eligibility requirements and other student-athlete issues, Smith noted.

“[NAFCED] could make a big dent in all the things that are wrong with college sports… People will listen to a high-profile coach,” he said, adding that pressure on the NCAA and the major athletic conferences from lawsuits and advocacy is gradually building toward a breakthrough on student-athlete compensation and scholarship support.

“Something’s going to pop soon, and it’s going to be huge. And it will be nice to see African-American coaches out front standing in the right spot,” Smith told Diverse.

Kenneth L. Shropshire, the David W. Hauck Professor at the Wharton School of the University of Pennsylvania, described NAFCED’s founding as focused on minority coaches regaining the influence they collectively had with the Black Coaches Association. “I’m impressed that the group came together. To some extent, it’s a call to legacy by the younger coaches [in recognizing] the likes of John Thompson and [John] Chaney,” he said.

Shropshire, author of the newly-released book “Sports Matter: Leadership, Power, and the Quest for Respect in Sports,” said he believed the old BCA thrived in part because it had a broad base of members and high-profile leaders. He added that it mattered considerably that the BCA’s advocacy on student-athlete eligibility helped propel the organization to the height of its influence.

“It was a clearly-defined mission beyond ‘We need more Black coaches’” that made the difference, Shropshire said.

Norvell said student-athlete issues will have high priority for NAFCED members. While younger coaches will get training and development, it’s expected that older and experienced coaches will focus on NCAA policy and issues, including those of student-athletes.

“[The experienced and high-level coaches are] not so much interested in [the training and development] as they are in policies, legislation, and issues that are affecting them as well as the student-athletes,” he said.