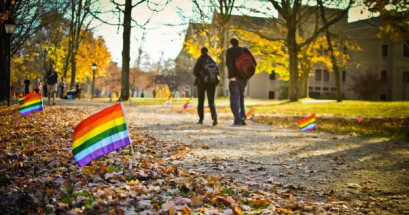 According to the report, which alleges that students at 33 universities across the country are being discriminated against in housing, athletics, admissions, financial aid and other key components of student life, a little-known provision in Title IX law allows educational institutions controlled by a religious organization to request an exemption from full compliance if it would conflict with religious tenets.

Institutions in the South and those affiliated with the Southern Baptist Convention were most likely to request exemptions, with Wesleyan and Catholic institutions following. Somewhat surprisingly, institutions on the West Coast were second to their Southern counterparts in exemption requests. California and Texas, with six each, were home to the most exemption seekers.

“Many Americans look to their faith as a source of guidance and inspiration. LGBT individuals are no different. At the Human Rights Campaign, we believe that religious liberty is a bedrock principle of our country,” said HRC President Chad Griffin in a letter included in the report. “We also believe that no one should use faith as a guise for discrimination, and that all students deserve to enter a school environment knowing they will be protected.”