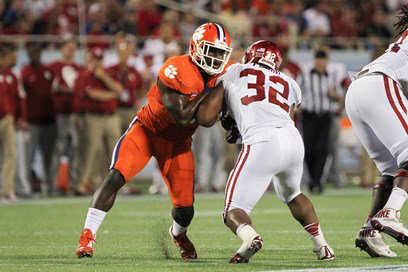 Clemson and the University of Oklahoma may be intense rivals in college football, particularly this year with the Capital One Orange Bowl at stake. But they are partners in what arguably is a more important arena: reducing the dropout rate of Native American high school students.

“We’ve been working together for a number of months. It just so happens we have a big football game coming up,” said Sandy Addis, director of Clemson’s National Dropout Prevention Center, a week before the CFP Semifinal at the Capital One Orange Bowl. “That was sort of a coincidence.”

Assistant director John Gailer agreed. “It just happened that way,” Gailer said. However, he added, “It has made for some very friendly banter.”

Well, somewhat friendly. Sooners involved in the conference planning also have been fairly lighthearted about the rivalry, but maybe not as ebullient as the Tigers, for good reason.

Clemson’s beatdown of Oklahoma 40-6 in last year’s Russell Athletic Bowl is still a sore spot among Sooner fans. When the first organizational meeting for the conference was held shortly after the College Football Playoff Semifinal at the Orange Bowl matchup was announced, “there was some discussion about it,” said Jacob Tsotigh, director of The University of Oklahoma’s South Central Comprehensive Center and a coordinator of the conference. “They [Clemson’s organizers] handed us some papers and there, staring us in the face, was that Tiger Paw in the Clemson colors,” Tsotigh said. “So we had to change that.” It was generally agreed that the Clemson organizers “needed to be more subdued in their branding,” he added, saying the matter was resolved amicably.

Addis and Gailer said one of the reasons Oklahoma was chosen as the conference location is that it has an 82 percent high school graduation rate for Native students compared to the national rate of 70 percent. Tsotigh said Oklahoma “historically has had higher rates,” which he attributes, in part, to the fact that “we do not have reservations in Oklahoma.”

Tsotigh said that the state has 39 tribes and that approximately one-fourth of public school students in Oklahoma are Native Americans or descendants of Native Americans. He also said the event is expected to attract more than 400 educators and community leaders from about 30 states.

Clemson’s 29-year-old National Dropout Prevention Center’s overall goal is “to increase graduation rates through research and evidence-based solutions,” according to its mission statement. Its programs and activities include such collaborations as the Clemson-Oklahoma project organizing the conference.

Topics at the conference will include addressing the opportunity gap; school climate: safety and student wellness; and family and community engagement. The closing date for submission of proposals is Dec. 31, the same day No. 1 Clemson faces No. 4 Oklahoma.