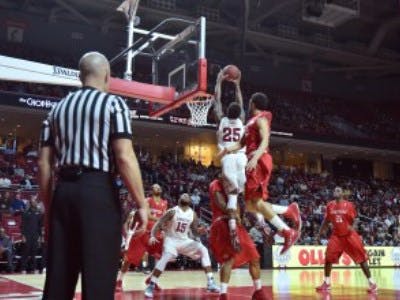 Academic progress among minorities on NCAA Division I basketball tournament teams has taken a commendable leap forward, despite continuing to trail the performance of Whites in the same college athletics ranks, a widely regarded annual study of the topic reported Monday.

Based on an analysis of Spring 2015 minority graduations from Division I tournament teams—the latest data available from the NCAA—the graduation success rate (GSR) rose to 75 percent of all players, the highest graduation rate since the first analysis was issued in 2005.

The data are based on a six-year count by the NCAA of students who entered college in the fall of 2008 and graduated by the 2014-15 school year.

“This 2016 report brings the best news for the academic progress of African-American student athletes since we have been publishing the report,” said Dr. Richard Lapchick, primary author of the annual report called “Keeping Score When It Counts.”

The latest report helped close what Lapchick called a “cavernous” gap between the graduation success rate of African-American students and their White counterparts. The most recent gap, 18 percent, compares to 24 percent for each of the past two years (2014 and 2015 tournament fields).

Lapchick is director of The Institute for Diversity and Ethics in Sports (TIDES) at the University of Central Florida, which conducts the analysis. He has led what at times has appeared a lonely campaign championing academic achievement among college minority athletes.

He has focused on the history of historically White institutions recruiting the best high school athletes for their teams then slacking off on making sure their classroom performance matches, if not exceeds, their game performance.

Monday’s SCORE report was the first of several to be released by TIDES this month.

Today, after the NCAA announces the women’s teams for this year’s tournaments, TIDES will release its annual report analyzing graduation rates on women and comparing that data to those of men, including a breakdown by race.

Later this month, TIDES will issue its final SCORE report, that one focusing on graduation rates for this year’s Sweet 16 basketball teams.

“Athletes are used to competing by raising the bar,” Lapchick said. “The academic reforms have led to positive change since their passage more than a decade ago. We need to raise that bar and move toward a 60 percent graduation rate being the acceptable standard for the APR (academic progress rate).”