In a talk that touched on topics that ranged from poor police-community relations in the United States to international politics, author and NBA legend Kareem Abdul-Jabbar cited poverty as the biggest barrier that threatens to block the shots that low-income students have at higher education.

“I think the biggest barrier is poverty because poverty makes it impossible for people to have the money and time to become first-rate students,” Abdul-Jabbar said Monday in response to a question posed by Diverse at the National Press Club, where he was visiting to promote his new book, “Writings on the Wall: Searching for a New Equality Beyond Black and White.” 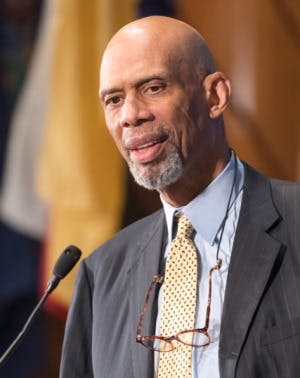 “Usually, they are struggling to put food on the table and keep a roof over their head, so they miss out on the opportunities that are extended to them to get into the middle class,” Abdul-Jabbar said.

Rather than preach about what other professional athletes should do to help alleviate the situation, Abdul-Jabbar chose instead to speak to his own endeavors.

Abdul-Jabbar — who also announced plans Monday to form a new regional holding company in Dubai, called Global Skyhook Connections Ltd after his famous “skyhook” shot — credited his own college education with enabling him to find success in other endeavors once his long and storied NBA career as the all-time leading scorer came to an end.

“The key to success was I wanted to go to college and I got my degree,” said Abdul-Jabbar, who graduated from UCLA in 1969.

“Those who haven’t done that will have problems,” Abdul-Jabbar said.

Much of Abdul-Jabbar’s talk Monday dealt with the strained relations between African-Americans and law enforcement in the United States.

Among other things, Abdul-Jabbar stressed the need for African-Americans to begin to think about police officers as “our police” as opposed to “the police.”

“It’s got to be about us,” Abdul-Jabbar said. “It can’t be about my side and their side, because we’re all fellow citizens.”

He encouraged people to approach matters with an open mind, engage in dialogue on complex matters of race without bitterness or anger, and shed the fear of being perceived as ignorant.

“We can’t be afraid of being seen as ignorant because ignorance is what’s doing all of this,” Abdul-Jabbar said. “Tamir Rice is dead because of the stereotypes police have about young Black men,” he said of the 12-year-old Cleveland boy shot dead by police in 2014 while at a park pavilion playing with a toy gun.

“We can’t continue to have these things happen,” he said, adding that police need better training so that they don’t “overreact.”

Abdul-Jabbar commended San Francisco 49ers quarterback Colin Kaepernick for kneeling in protest during the national anthem at football games, as well as the growing number of college and high school athletes who have followed suit.

He said athletes should not be afraid to speak out on pressing matters of the day and cited as an example boxing great Muhammad Ali’s refusal to be inducted into military service on the basis of being a conscientious objector during the Vietnam War.

“A lot of professional athletes think they will ruin their brand,” Abdul-Jabbar said. He praised Ali for sacrificing the best years of his career to protest what he described as an unjust war in Vietnam — a position that initially drew widespread contempt but later won him great acclaim and vindication by the Supreme Court, which overturned his conviction for draft evasion.

“Our country is sorely in need of that kind of courage,” Abdul-Jabbar said. “They have to start to see that the value and what they can achieve on the positive side is worth the risk.”

Abdul-Jabbar cited the recent decision of NBA basketball legend Michael Jordan to get involved in police-community issues by donating $2 million — half to the International Association of Chiefs of Police’s newly established Institute for Community-Police Relations and half to the NAACP Legal Defense Fund — as an example.

Years ago, Abdul-Jabbar said, Jordan made a remark — allegedly — about how Republicans buy his shoes, too, as an apparent reason why he stayed out of political issues.

“But they’re still buying his shoes,” Abdul-Jabbar said. “It’s not as bad as you think.”

Earlier in the day, Abdul-Jabbar visited the U.S. Chamber of Commerce to announce his new company. Among other things, the company plans to seek product and event licensing deals, cultural exchange events, and health awareness programs. It also plans to promote a tourism project that revolves around creating an International Hall of Fame for Muslim Athletes.

He said various remarks that Republican nominee Donald Trump has made about minority groups, such as the undesirability of Muslims and Mexicans, were “disappointing.” He also criticized the self-described “law and order” candidate for calling for policies that enable police officers to “stop-and-frisk” people in order to combat urban violence.

“These people are stopped for no reason other than they live in a high crime area. Probable cause doesn’t even enter [the police officers’] minds. That’s wrong,” Abdul-Jabbar said, adding that the practice runs contrary to the U.S. Constitution. “We have to find a better way.”