Based on longstanding efforts to squelch their voice at the polls, people of color in the United States must prepare themselves for the political power they stand to gain through population increase—or risk being ruled by a White minority like the old apartheid system in South Africa.

That was the warning that Gloria J. Browne-Marshall, a civil rights attorney and constitutional law professor at John Jay College of the City University of New York, delivered recently during a talk to promote her new book, “The Voting Rights War: The NAACP and the Ongoing Fight for Justice.” 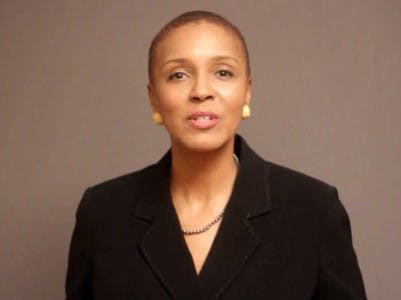 Law professor and civil rights attorney Gloria J. Browne-Marshall says people of color in the U.S. must plan for the political impact of the shifting demographics “because other people already have.”

Pointing out how projections show that non-Whites will constitute a majority in the United States by the year 2045, Browne-Marshall said people of color should consider the political clout that will come about as a result.

“We have to think about it now because other people already have,” Browne-Marshall said during a recent “book rap” at the National Press Club.

“If this is new to you it’s not new to a people who are fiercely fighting this ideal of democracy if it means sharing power, because they know 2045 is coming.

“That’s why we need the progressives in action,” Browne-Marshall said. “That’s what the NAACP was, a combination of progressive Whites and African Americans, and then their organization inspired other organizations for Latinos and for Asians, for other people to also fight for their legal rights.”

Browne-Marshall’s remarks, which come at a time of sharp political and racial divisions, portrayed the NAACP as an exemplar for future political and legal fights.

Despite ruminations that the NAACP has “lost its luster,” Browne-Marshall said the 107-year-old civil rights organization remains relevant in the areas of litigation, legislation and protest.

“That was the key to the social change the NAACP was able to effect,” Browne-Marshall said, touting the organization’s historic legal victories in the area of voting rights. “Because those elements have been divided, alone they cannot do what the NAACP and other organizations did in the past.”

Not everyone is so impressed with the legacy of the NAACP.

In an op-ed that appeared over the weekend, Milwaukee County Sheriff David Clarke, a lightning rod for the Republican Party, lambasted the NAACP as “one of the most irrelevant brands in the United States” and added that “even the name is outdated.”

“They have sold out their original mission of freedom for Blacks and instead have become slaves to a new master, the Democrat Party,” Clarke wrote in his article for The Hill.

“The NAACP is so desperate to provide cover for the progressive’s favorite dog-whistle, ‘racism,’ it has now completed its journey from being a voice for the black community to essentially being the National Association for the Advancement of Caucasian Progressivism.

“I challenge the NAACP to tell us the last significant policy change on behalf of civil rights in which they were instrumental,” Clarke continued. “It was 1954 in the landmark case Brown v. the Board of Education, which desegregated schools. That is it; nothing since.”

Browne-Marshall said contemporary attempts to curtail political power of people of color—such as felony disenfranchisement at the polls, gerrymandering or voter ID laws that have a disparate impact on minorities—must be viewed as part of a longstanding attempt to kill their electoral power.

She maintained that, throughout history, “the rules change” whenever Black people are on the verge of coming into power.

For instance, she cited the case of Anthony Johnson, a Black landowner in colonial Virginia who lost his land—which conferred the right to vote—after a court concluded that he was an “alien” by virtue of being Black.

Browne-Marshall said people of color must plan to continue to fight in the courts to preserve their voting rights. She called for litigation to strip the right of states to deny felons the right to vote because—although not racial on its face—the practice has a disproportionate impact on people of color.

“We need to think about—for voters of color—what does the future hold?” Browne-Marshall said. “It’s very bright, but you’re going to fight for every inch of political power you attain, because the sharing of power in this country frightens some people.

“And the same way they created laws and then turned around and said we’re going to change the law because you’re getting too far out of your place, and your voice will affect my destiny, and for some people they can’t stand the fact that there are certain voices affecting their destiny,” she said.

Though often unspoken, she argued that many were upset by the fact that states essentially had to seek permission from two Black men—President Barack Obama and former US Attorney General Eric Holder—to change their voting laws until a key “preclearance” provision of the Voting Rights Act of 1965 was struck down in 2013 as unconstitutional.