That’s where many HBCUs fall behind, especially at the Division II level.

Not for Virginia State University (VSU). A small team of producers with big accolades is helping put together polished, in-house content that helps VSU stand out above much of the work going on in Division II. 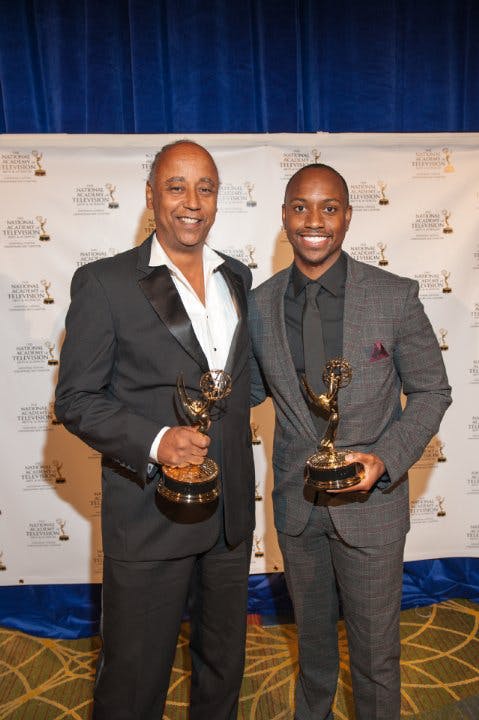 Jesse Vaughn, left, and Cedric Owens are setting a new standard in terms of production of HBCU sports content.

Jesse Vaughn is director of VSU’s Advanced Creative Services Group, an in-house advertising and production company at the school. He’s also a 27-time Emmy Award-winning filmmaker, who, along with fellow Emmy-winner Cedric Owens, has produced several pieces that are setting a new standard in terms of production of HBCU sports content at the university level and live on the school’s VSU Today YouTube channel.

“It’s basically two guys and a camera. We’re a small operation,” Vaughn said. The videos are shot in HD, of course, and use drone footage to complement interviews in stage lighting.

“We spend a lot of time working on our own individual crafts and development of our skillsets and I think that’s what you’re seeing when you see our videos. You’re see a lot of our passion for what we do and our love for what we do.”

In the past year, the team has produced high-quality content regarding VSU’s football program as well as it’s men’s and women’s basketball teams and one on the sparkling new 6,200-seat VSU Multipurpose Center, which opened in 2016.

“They’ve been doing really wonderful stuff for Virginia State for a number of years,” VSU President Makola M. Abdullah said. “We’re so fortunate to have them here on campus, and [we’re] really tying that to this new social media push to make sure people really see us and know what we’re doing.”

The production quality as well as the solid storytelling make sense when you consider Vaughn’s background. After spending time as a news director in D.C., Vaughn started a production company and worked on In Living Color, the Olympics, and directed the feature film Juwanna Mann. When his time in Hollywood was done, the Virginia Commonwealth University alum decided to come home and ended up at the Ettrick, Virginia, school.

“I choose Virginia State University as a place to be because I saw its unbounded potential to be able to influence young African-American people to seek higher education as a way to solve a lot of problems in our community,” he said.

Abdullah, who was installed as the school’s president in February 2016, said that sports are a key component to showcasing and growing a university.

“Athletics is really a front door to your institution,” he said. “There’s so much press and media centered around your student-athletes — it’s a wonderful way to introduce people to the institution.”

Abdullah even found his way into one of the videos, catching punts with the football team.

“The football coach kind of casually challenged me to come out to catch punts. I thought that was just a wonderful idea, so I took him up on it,” he said. “He said that, if I caught, that the young man wouldn’t have to run laps at the end of practice, so he put a little pressure on me. But the players gave me some wonderful advice and I was lucky enough to catch it.”