A passion for softball keeps Nicole Evans motivated on and off the field. She loves to win but knows that bumps along the road can sometimes make that ultimate victory more meaningful.

Recalling a game against Florida State University at the start of the season last year, the University of Illinois at Urbana-Champaign (UIUC) senior says, “I just remember the feeling of ‘I only have a few more games left. I only have a few more seasons that I get to play.’ And I just remember standing in the outfield and looking out at the field after our win, and just, you know, relishing the moment and how great it was.” 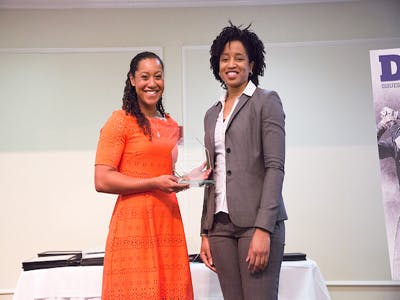 Nicole Evans, left, accepts a plaque recognizing her as the female winner of the 2017 Arthur Ashe Jr. Scholar Athlete award. Sonja Robinson, NCAA director of minority inclusion, presented the award as selected by Diverse at a luncheon Tuesday at the University of Richmond. (Photo by Kim Schmidt)

Evans was always athletic, a characteristic her mother noticed and cultivated from an early age, putting her in dance, tap and gymnastics classes in their hometown of Glen Ellyn, Illinois, a suburb west of Chicago. Evans says she knew that dance and gymnastics were not quite the right fit for her temperament even then, so she switched to soccer before settling on softball.

“The funny story there is that I decided that I really didn’t like running, so we decided to try softball instead,” Evans says.

After trying out for a traveling softball league in fourth grade, Evans was initially cut, but she got a call back when another player dropped out. From there, her softball career blossomed. Yet even when she reached high school, Evans played primarily for the love of the game and spending time with her teammates, not with the goal of being recruited.

“It was never ‘Oh, I’m going to go to college to play softball,’” Evans tells Diverse. “I just started playing because it was fun and all my friends were playing it. I never really thought I would play in college until I started getting recruited.”

After visiting the UIUC campus, Evans knew that it was where she wanted to be.

As a college athlete, she made her mark as one of the top contributors to the team. “She’s the number one hitter on the team right now,” says Marlon Dechausay, UIUC associate director of athletics and academic services.

Dechausay is also the softball academic counselor, meaning that he works directly with the team.

When asked about her strong hitting record, Evans modestly says, with a laugh: “That’s kind of my thing.”

Evans consistently emphasizes her team’s accomplishments over her own when speaking with Diverse.

Last spring, the team made it to the NCAA Regional for the first time since 2010 and to the NCAA Tournament for the fifth time ever.

“We weren’t sure if we were going to make it to postseason, so we’re watching the selection show in the locker room, and our name came up, and I’m like a grandma — I started crying,” Evans says. “That’s one of the moments I’ll never forget.”

According to Dechausay, Evans’ contributions were key to the Fighting Illini making it to postseason, adding,

“She’s the complete student-athlete. She’s one of those people that we’re going to be glad that we had the interaction with because we know she’s going to do great things in the future.”

Off the field, Evans maintains a 3.8 GPA in her chosen major of kinesiology.

She plans to become a physician’s assistant and has already been accepted to the UIUC master’s program. She is also heavily involved in community services through her team, working with Big Brothers Big Sisters of America and volunteering with the Down Syndrome Network.

“They’re some of the best fans that we have, and they and their families are some of the greatest people,” Evans says. “So I’m really happy we have that connection on our team.”

In addition, Evans was the sole student representative in UIUC’s recent search for a new athletic director last year, a sign that her outstanding leadership is recognized by the broader campus community.

“That was a very eye-opening experience, to see how everything works behind the scenes and to see how many qualified individuals are out there,” Evans says.

“Then to put someone in the position here who loves this place as much as we do and to leave knowing that he’s here helping the student-athletes achieve was really, really rewarding.”

In the face of all her achievements, Evans remains humble, saying, “I’ve been really lucky and blessed to have all these opportunities.”