This weekend was a tough one for minority head coaches in the Football Bowl Subdivision (FBS). Out of the 14 coaches that had games only two won. In the game of the week (week 6) Derek Mason and Vanderbilt lost to the 2nd ranked University of Georgia. The game of week this week (week 7) features 7th ranked Washington taking on Mario Cristobal and 17th ranked Oregon Saturday at 3:30 p.m. ET.

Associated Press (A.P.) rank 8 – James Franklin (4-1) and Penn State had the weekend off. This week face very good Michigan State team who was ranked 20th last weekend before falling to Northwestern University. This will be a must win game for Penn State if they are going to keep the chances of getting into the College Football Playoff alive. 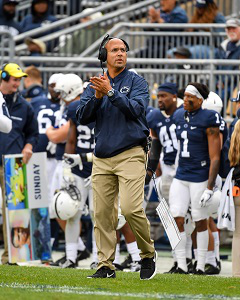 Lovie Smith (3-2) and Illinois improved by winning against Rutgers 38 – 27. This week they play at home against Purdue.

David Shaw (4-2) and Stanford lost to Utah 40 – 21. They travel to Arizona State this week to take on Herman Edwards in match up that both teams need to win for a shot at the conference championship.

Herman Edwards (3-3) and Arizona State lost 28 – 21 to Colorado who is now ranked 19th and undefeated. Arizona State is off this weekend.

A.P. 17 – Mario Cristobal (4-1) and Oregon had the weekend off. This week they play in the game of week when 7th ranked Washington comes to Eugene. This will be one of the most important games of the season for both teams with the winner likely to play in the conference championship.

Kevin Sumlin (3 -3) and Arizona improved by beating California Berkeley 24 – 17. This week they play at Utah on Friday.

Dino Babers (4-2) and Syracuse lost on the road at Pittsburgh 44 – 37. Syracuse is off this weekend.

Derek Mason (3-3) and Vanderbilt lost on the road to 2nd ranked Georgia. They have another tough game this week when they play 14th ranked Florida in Nashville.

Jay Norvell (3-2) and the University of Nevada Reno lost to Fresno State 21 – 3. This week they plat Boise State in Reno.

Anthony Sanchez (2-3) and the University of Nevada Las Vegas lost to New Mexico 50 – 14. This week they play Utah State on the road.

A.P. 23 – Charlie Strong (5-0) and South Florida are now ranked 23rd after beating the University of Massachusetts 58 – 42. This week they play at Tulsa on Friday.

Scottie Montgomery (2-3) and East Carolina lost to Temple 49 – 6. This week they play Houston at home in Greenville.

Ken Niumatalolo (2-2) and Navy lost to Air Force 35 – 7. This week they play Temple in Philadelphia.

Frank Wilson(3-3) and Texas San Antonio won against Rice 20 – 3. This week they play Louisiana Tech on the road.

Everett Withers (1-4) and Texas lost to Louisiana, Lafayette. This week they play on Thursday at Georgia State.

Kalani Sitake (3 -2) and Brigham Young University lost 45 – 20 to Utah State. This week they play at home against Hawaii.