Future of Justin Fields Remains in Balance as NCAA Meets

The future of Justin Fields is unclear, even as the NCAA held its annual convention in Orlando over the weekend.

Fields, a quarterback at OSU enrolled at the school this week after spending his first season playing college football at the University Georgia. He has asked the NCAA for immediate eligibility in hopes of playing this academic year.

Typically, Fields would have to sit out a year after transferring, but his attorney, Thomas Mars, has said that a new NCAA transfer waiver guideline that was put in place last April should be utilized.

Fields’ decision to transfer was heightened, in part, after he was the subject of racist comments.

“My time at the University of Georgia has given me the opportunity to refine my skills under great coaches and to play with incredibly talented teammates who’ve become like brothers to me,” said Fields in a statement posted to social media where he announced that he had decided to transfer to OSU to play for the Buckeyes. “I’ll miss my teammates more than they’ll ever know, and I wish them all the best as they get ready for another season. I hope the bonds we’ve developed this past year will never be broken by where we choose to play football or where we end up after college.” 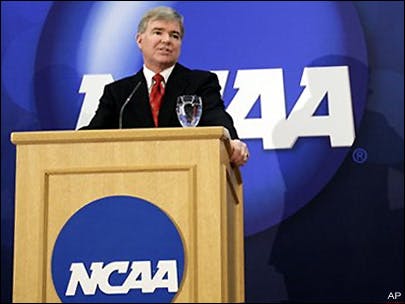 Mark Emmert is the president of the NCAA

Fields’ request for the immediate transfer waiver has received public support from civil rights leader, the Rev. Al Sharpton, who said that the 19-year-old from Kennesaw, Georgia should be  allowed to play football this year.

“I would hope that the NCAA would not take him off the field for a year,” said Sharpton, adding that to do so would be to “co-sign the insults he’s had to endure” during his time at the University of Georgia. “Victims cannot be penalized.”

It is unclear when the NCAA will make a decision on the case. But the NCAA’s board of governors has given initial approval to a measure aimed at preventing non-traumatic deaths in offseason workouts.  The decision comes in the wake of the death of Jordan McNair, the Maryland football player who died in June after a workout. The association also voted to allow leaders from outside higher education to join college and university presidents on the NCAA board for the first time.

At the convention, the University of Wisconsin-River Falls athletics department received the 2019 Award for Diversity and Inclusion.

“As an association, we are living in times where our values continued to be challenged on every front,” said Dr. Katrice Albert, NCAA executive vice president of inclusion and human resources. “We stand as current and future leaders for a society whose very essence is based on our diversity and whose very strength is based on our intentional actions around inclusion.”

Albert said that UW-Rivers Falls has implemented policies and programming that has made diversity and inclusion a top priority for the athletics department. Former UCLA star and Olympic champion Jackie Joyner-Kersee received the NCAA President’s Gerald R. Ford Award, which honors an individual who has provided significant leadership to college sports.

In a conversation with NCAA President Mark Emmert, Joyner-Kersee said that she opened up a community center in her home town of East St. Louis, to give young people an opportunity to excel.

“We’re trying to make a difference in the young people who walk the same streets and the same pavement that we did,” she said. “For me, I came through a community center in East St. Louis and I didn’t know at the time of the impact it was having, but I knew I was learning from people.”