The University of Wisconsin-Madison (UW) has announced that Quintez Cephus, the school’s former wide receiver, was admitted back on the football team after being acquitted of sexual assault charges. 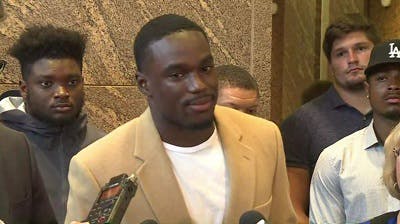 Last August, Cephus was suspended from the team and eventually expelled from UW after two women accused him of sexual assault.

However, Cephus was later acquitted.

His teammates, fans and African-American community leaders have supported and advocated for his return to the school and team, according to CBS Sports.

After his expulsion, Cephus was not considered a student in good academic standing. He was eligible to play only on UW’s team or at a junior college.

“I know the past year has been painful for everyone involved,” UW chancellor Dr. Rebecca Blank said in a university statement. “I recognize that some will disagree with this decision. To those in our community who have experienced sexual assault, I sincerely hope that there is nothing in this case that will deter [persons] from coming forward for support.”