Stephen Curry is among the premier scorers in the NBA, but Monday the two-time NBA MVP handed out a big-time assist.

An avid golfer, Curry announced he will make a seven-figure donation to start NCAA Division I men’s and women’s golf teams at Howard University. 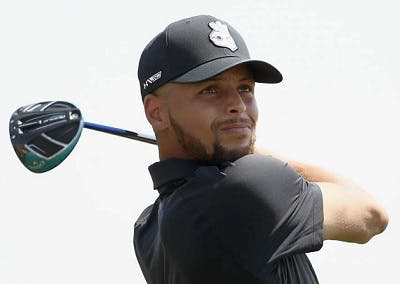 Howard will become the 34th black college to have golf, although it had Division II teams decades ago.

Curry committed to help fund the program for six years starting with the 2020-21 school year.

“Today is obviously a historic opportunity for not just Howard, but I think all historically Black colleges and universities,” Howard president Dr. Wayne A.I. Frederick said Monday during a press conference at the Langston Golf Course in Washington, D.C., where Curry’s gift was officially announced.

Curry was inspired to support launching a golf program during a January conversation with Howard senior Otis Ferguson, who like Curry is an avid golfer. Curry and the Golden State Warriors were in Washington to play the Wizards and the team visited the Howard campus to view a screening of “Emanuel,” a documentary about the shooting of nine Black worshippers at a church in Charleston, S.C.

The two talked about their love for golf. Ferguson told Curry how he turned down an offer to play on the college level to attend Howard, which, like most HBCUs, didn’t have a golf team.

Curry’s six-year commitment allows Howard time to raise an endowed fund that would enable the program to be self-sustaining.

“We haven’t had people do that for athletics,” Frederick said, while describing Curry’s donation as one of the most generous in the 152-year history of the school.

“It’s significant. That’s the argument I’ve been trying to make since I assumed the presidency. This is one of America’s best investments. HBCUs, the return on the investment has been incredible for the country. He has celebrity, but I hope that what people will get out of this story is his integrity, his purpose, his motivation behind doing these things.”

Curry picked up golf from his father, Dell Curry, who played 16 seasons in the NBA. The younger Curry played three years on his high school golf team and has a five handicap. He plays in several celebrity tournaments and received an exemption to play in the 2017 Ellie Mae Classic on the Korn Ferry Tour – failing to make the cut but finishing ahead of a number of other amateurs in the competition.

In June, Curry also launched his first golf capsule collection with Under Armour. He recently debuted a mini-golf series on ABC, Holy Moley. The show features mini-golf stars playing head-to-head matchups on a supersized course, and Curry is among several producers.

“Golf is a sport that has changed my life in ways that are less tangible, but just as impactful,’’ Curry said. “It’s a discipline that challenges your mental wherewithal from patience to focus, and is impossible to truly master, so when you hear about these passionate student athletes who have the talent but don’t have a fair shot at the game, it’s tough. I feel really honored to play a small role in the rich history of Howard University, and look forward to building their first men’s and women’s golf teams with them.’’

Augusta is the top program in the conference, having won back-to-back national championships in 2010 and 2011 with a roster that included Masters winner Patrick Reed.

Augusta is only a member of the MEAC for men’s golf. The women will compete as independents because there are no women’s teams in the conference.

Student-athletes in the golf program also will agree to volunteer in Greater Washington with Eat. Learn. Play., a foundation run by Curry and his wife, Ayesha. The program encourages healthy development in children.

“This is going to go way beyond the game of golf, way beyond Howard,” Curry said. “This is huge.”

Under Armour, the shoe company that sponsors Curry, will outfit the teams, and Callaway Golf will provide equipment. It is unclear where the teams will practice and play.