The consensus at this year’s Intercollegiate Athletics Forum (IAF) is that changes are coming to the NCAA and overall governance of college sports, but questions remain about when and how. 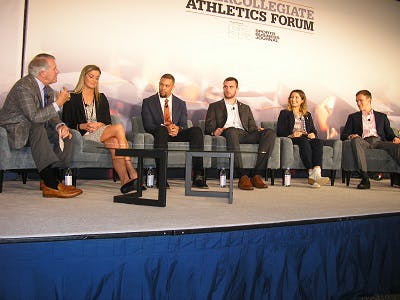 Virtually every moderator and panelist at the IAF, held in New York City this week, mentioned the issue of student-athletes’ rights to earn money from their names, images and likenesses (NIL), but no one was able to say how it will unfold, what it will include and when it will take place. With California Governor Gavin Newsom signing a bill that will make it easier for college athletes to monetize NIL and similar bills pending in several states, it was agreed there needs to be national standardization as well as thoughtful consideration on how to implement this.

In a one-on-one interview with sports attorney Glenn Wong, former U.S. Secretary of Education and current co-chair of the Knight Commission Arne Duncan said the structure of the NCAA needs to change. With coming changes surrounding NIL — California’s new law is due to take effect in 2023 — Duncan said it’s time for college sports to get in front of issues.

“The NCAA has been too slow in addressing issues of name, image and likeness,” said Duncan. “It’s not like we didn’t know the issue was coming.

“To pretend someone whose jersey is selling isn’t related to the person makes no sense,” he added. “To act like that individual doesn’t deserve some piece of that revenue, that’s wrong.”

He noted that many student-athletes are people of color, while coaches, athletic directors and college presidents aren’t nearly as diverse. “When you have White institutions and White people at the top letting the revenue from what those of color are generating go elsewhere, that’s wrong,” said Duncan.

Duncan said it’s time to challenge the status quo. It’s clear the Power 5 conferences need to either establish their own division within the NCAA or become a new entity.

“So many of the challenges of the NCAA are driven by those conferences,” Duncan said. “There was negotiation a couple years back where the conferences were threatening to leave. I think that was a bluff. I think the NCAA could have called that bluff. It was a tough call to make, but I would have stood a little bit more firm in that situation.

“So, you could create a Division IV; that’s another way to go at it,” he continued. “Or say this is a new semi-pro entity.”

He further noted that individual states passing NIL legislation is sub-optimal. Once NIL issues are resolved and NCAA structure redefined, the NCAA can focus more energy on seeing to it that student-athletes earn their college degrees. Duncan suggested non-revenue-generating sports could be reorganized into conferences with institutions close in geographic location, which means less travel and more time to focus on academics.

“When values get lost in the chase for more and more revenue, student-athletes are lost,” Duncan said.

In the panel discussion titled, “The Challenges and Benefits that Come Along with Being a High Performing Student-Athlete,” the five student-athletes said they rarely discuss issues of NIL with teammates, but certainly think it’s a good idea.

Kiera Dalmass, a lacrosse player at University of Connecticut, said it is essential institutions provide financial literacy to student-athletes prior to any NIL implementation.

In his annual turn in the hot seat, Dr. Mark Emmert, president of the NCAA, provided little information about how he envisioned NIL coming to fruition. He said it’s complex and he wants to see the rules modernized thoughtfully and carefully. He did acknowledge that it won’t work with states having different rules and he doesn’t want to see student-athletes becoming employees of their colleges and universities.

“How do you do it in a way that does no damage to what exists?” Emmert said. “How can you create a model that doesn’t trigger commercialization?”

Emmert did discuss an important issue that was covered in greater depth in a subsequent session, which is that more attention should be paid to issues of mental health and wellness of student-athletes.

At the panel titled, “Student-Athlete Mental Health and Well-being,” Big East Conference Commissioner Val Ackerman discussed initiatives that are taking place in the Big East. The conference began examining mental health issues about five years ago and held its first mental health summit in 2017. There have been subsequent forums in 2018 and 2019. She noted that Dr. Brian Hainline, chief medical officer of the NCAA, has produced information and resources that can be accessed online.

Ackerman was joined on the panel by Tory Lindley, president of the National Athletic Trainers’ Association, and Kym and Mark Hilinski, co-founders of Hilinski’s Hope Foundation, named for their son, Tyler Hilinski, a quarterback at Washington State University who committed suicide while struggling with depression. The foundation’s three parts are raising awareness, erasing stigma around mental health issues and knowing it’s OK to speak up when experiencing problems.

All panelists said athletic departments need to provide student-athletes with adequate counseling services. Oftentimes, there are only a couple of counselors for many student-athletes. Trainers and coaches should pay close attention to student-athlete behavior. Ackerman said the Big East is also developing peer-to-peer mentoring.

“Athletes can be taught to help fellow athletes,” said Ackerman.

“Think creatively to create more resources,” said Kym Hilinski. “What’s encouraging to us is that conversations are taking place.” 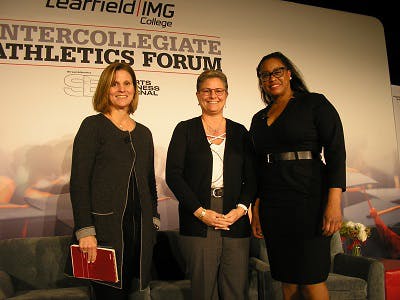 Jude said at every institution at which she has worked, she was the first African-American woman to hold the position. When she was the athletic director at Queens College, she made the department more diverse and inclusive. She praised Wyoming athletic director Tom Burman for bringing her onto his senior staff.

The moderator and panelists agreed that it’s important to be unafraid to have difficult conversations about race, gender, diversity and inclusion.

“How about we create an environment where it’s OK to ask questions?” said Kaplan. “It takes trust to be able to challenge each other.”

Kaplan said since an important part of their jobs is to educate the next generation, they cannot succeed without asking tough questions and having meaningful conversations on a regular basis. The goal is to stretch everyone’s knowledge.

Jude is also involved on a national level with helping other people of color find success in athletics administration. She is the president of the Minority Opportunities Athletics Association (MOAA), which currently has about 700 members, and she is the founder of the Women of Color Athletic Directors Network.

“The mission of [MOAA] is to educate, to advocate for those who are supporting underrepresented populations in this industry,” Jude said. “Members are all across the country. We meet on an annual basis and continue to get education, networking, growth, development, so we can make sure that ethnic minorities are ready to work in this industry.”