Precedent-setting wins are among the extraordinary accomplishments of the collegians who competed in Tokyo.

The path to the Olympic Games for athletes in sports like swimming, track and field, basketball and volleyball runs through intercollegiate competition. Many of the top competitors came to Tokyo with NCAA titles on their resumes.

For some, their college days were behind them, like 40-year-old Sue Bird, winner of her fifth gold medal in basketball, who won NCAA titles in 2000 and 2002 while at University of Connecticut. Others, like University of Michigan swimmer Maggie MacNeil, who won three medals representing Canada (gold in the 100-meter butterfly, silver in the 4x100 relay and bronze in the 4x100 medley relay), are returning to campus to complete their degrees after their Olympic glory. 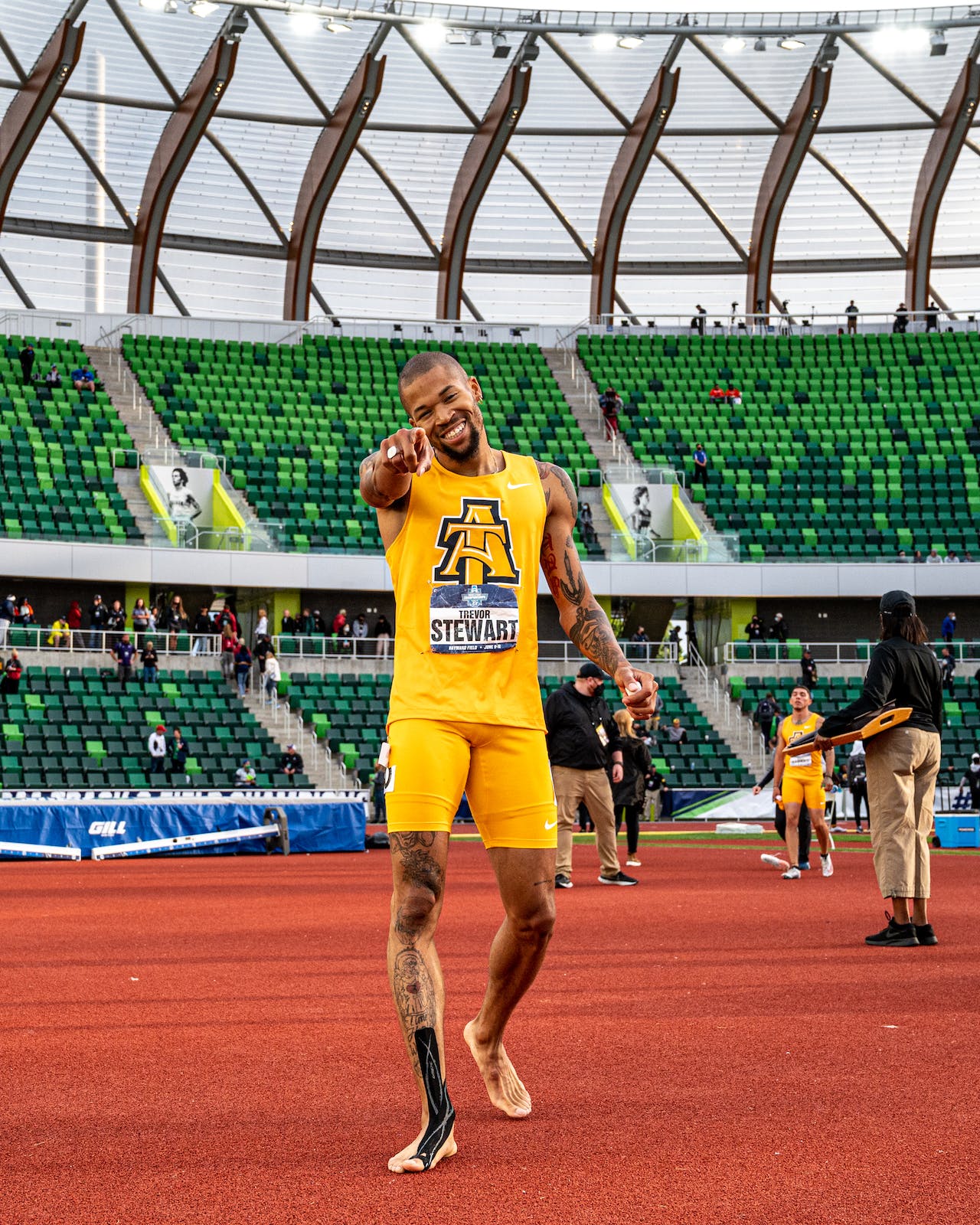 Olympic gold and bronze medalist Trevor Stewart of North Carolina
A&T State University. (Courtesy of North Carolina A&T Athletics)These Olympics, delayed for a year due to COVID-19, were unlike any before them. There were no spectators other than athletes, coaches, officials and volunteers. International visitors were not allowed. Athletes could not have family and friends accompany them.

While the cheers may have been more subdued, the accomplishments were extraordinary and in some cases history-making. Trevor Stewart and Randolph Ross Jr. won Olympic gold medals as part of the U.S. men’s 4x400 relay, the first gold medals in the history of North Carolina A&T State University, an historically Black institution. Earlier in the Games, Stewart won bronze as part of the mixed 4x400.

“I would like to think that it continues to set the bar high for our students and student-athletes,” says Duane Ross, director of track and field programs at North Carolina A&T. “Great things are happening at NCAT and can also happen at other HBCUs when properly supported and encouraged.”

Stars are born and made

Nobody burst onto the Olympic stage with more dazzle than 19-year-old Athing Mu, who recently finished her freshman year at Texas A&M University. Joined in Tokyo by two dozen other Aggies past and present, Mu won gold in the 800 meters, the first U.S. woman to do so since 1968, and as a member of the 4x400 relay, in which she ran the anchor leg.

Head track and field coach Pat Henry says he and assistant coach Milton Mallard discussed Mu’s goals during the recruiting process. When Henry went for the home visit, he could feel how motivated Mu was.

“I have a lot of athletes who tell me way before it’s even feasible, ‘Coach, I’m going to make that Olympic team,’” Henry says. “Not necessarily saying they’re going to win a medal, but they’re going to go to the Olympics because that’s … the greatest track meet on the planet.

“[Mu] was more of ‘I want to go, and I want to win.’ That kind of separated her a little bit, even though anybody in their right mind would not tell you that an 18- to 19-year-old is going to be a gold medalist.”

When MacNeil was recruited to swim at the University of Michigan, she was relatively unknown. She says the coaches were not sure how she’d perform, much less able to envision her becoming the first Michigan varsity female athlete to earn three Olympic medals.

“As soon as I started to develop more, they saw the possibilities,” MacNeil says. After she returned from the 2019 World Championships with three medals, including gold in the 100-meter butterfly, the coaching staff began to say her goal should be to win at the Olympics.

This past academic year, MacNeil focused on online courses to give her flexibility. She competed at the NCAA Championships in March and returned to Canada in early April to quarantine ahead of the Olympics at her family’s home in London, Ontario. After quarantine, she headed to Toronto to train at the High Performance Centre until the Canadian Olympic trials in June. Had the Canadian trials happened as originally scheduled in April, she would have had a conflict with the NCAA Championships due to Canada’s two-week quarantine rule.

“That was something I was prepared to have to deal with, but luckily I got to have the best of both worlds,” says MacNeil.

Leading up to the Olympics, Joseph Fahnbulleh, a sprinter at the University of Florida who represents his parents’ homeland of Liberia, spoke with assistant learning specialist Laura Claydon about not losing sight of his academic goals. 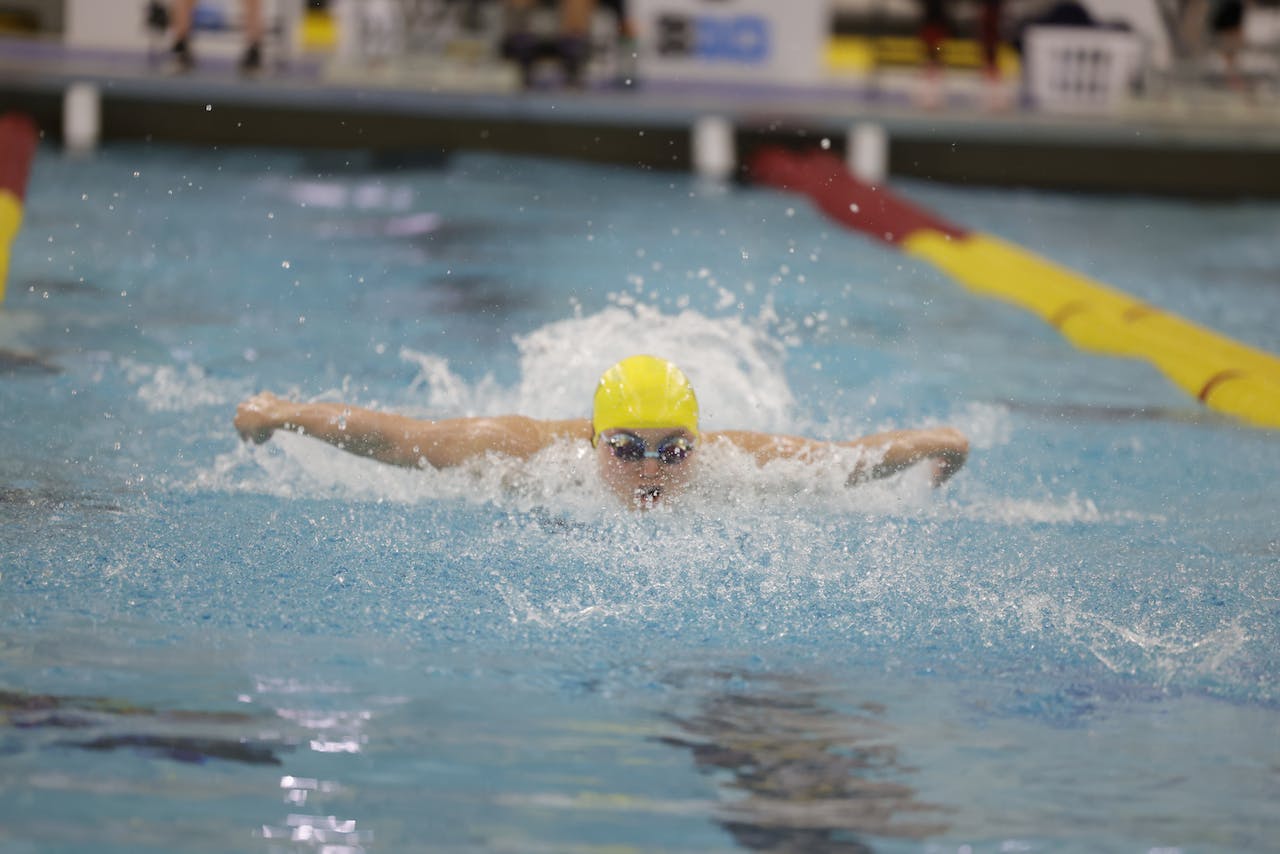 Three-time Olympic medalist in swimming Maggie MacNeil of University of Michigan. (Courtesy of Michigan athletics)“We had very intentional discussions prior to his departure [to Tokyo] about how school doesn’t stop just because it’s the Olympics,” says Claydon. “We worked with a lot of reminders of when assignments are due and lots of Googling what time it is in Tokyo before calling to check in.”

Another Florida track athlete who competed in Tokyo was sprinter Doneisha Anderson, who represented the Bahamas. Her academic advisor, Marina Coleman, knew Anderson had Olympic goals, but says she has been equally focused on academic success.

“I am here to help them by serving as that middle piece that connects their academics and athletics and reminding them that they can have the best of both worlds,” says Coleman. “On the mental health side, our mental health consultants have been amazing as well as helping our student-athletes navigate through any mental blocks they may have been experiencing to help give them the last mental boost they needed to achieve an athletic or academic goal.”

Ross says coaching Randolph Ross (his son) and Stewart at the Olympics was not different than coaching them for intercollegiate competition. Both have won NCAA titles.

“This preparation has been in the works since these young men started school here at NCAT,” says Ross. “Assisting them with their dreams, education and preparation for life after college is a great responsibility that I take seriously.”

It was a challenging 18 months leading up to the Olympics. Campuses were cleared in March 2020 due to the pandemic, and many student-athletes had to find makeshift training situations. When they returned to campus last fall, most classes were virtual, which meant they spent a lot of time in their dorm rooms.

“Every NCAA athlete understands that their first responsibility is to the institution,” says Henry of the necessity of balancing representing their universities and preparing for the Olympics. “They all know their commitment to college athletics, but they also know that … in an Olympic year or World Championships, we’re going to try to balance how they compete on the NCAA level as well as giving them the opportunity to compete at the highest level.”

Working toward the future

MacNeil went home to Canada shortly after her Olympic races were done. She returned to Michigan at the end of August and is excited for her senior year.

“There’s one more thing on my bucket list to do before I graduate, and that’s to win a team Big Ten Championship. That’s the main goal for this year,” says MacNeil, who hopes to also compete at the 2024 Olympics in Paris.

Mu has announced her decision to turn professional and will no longer compete in NCAA competition. She has said she will continue to train at Texas A&M and pursue her degree. Deadmon recently completed his master’s degree, and his NCAA eligibility is now done, but Gittens, Yeboah and Young are all expected to compete next season.

“Once you get around some of the best in the world … in the [Olympic] village around great athletes in every discipline and in every sport, I think it teaches you that the level of commitment is the determining factor,” Henry says. “Most of those young people who go to the Olympic Games come back with a different demeanor.”