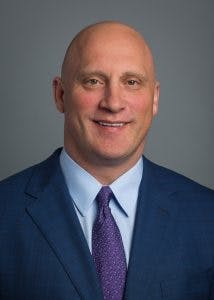 Richard Schulte, an attorney representing former athletes in a lawsuit against The Ohio State University.In a survey conducted by Lauren’s Kids, a nonprofit that educates parents and children about sexual violence, more than one quarter of current or former student athletes reported experiencing sexual assault of harassment perpetrated by someone in a position of power on their campus.

This means that athletes are 2.5 times as likely to survive abuse on campus, and that coaches were more often the perpetrators of the abuse.

Attorney Richard Schulte is one of the lawyers representing some former  athletes at The Ohio State University, who are suing the university over the abuse they experienced at the hands of former athletics doctor Richard Strauss.

“This is a small study, but a very powerful one in my view,” Schulte told USA Today. "It provides real data and information for parents, people, and legislatures to see what’s going on. We need more studies like this.”

Of the athletes who experienced abuse, half said they feared retaliation by their perpetrator and only 25% said they reported the incident to the campus administration. About 40% said they felt pressure not to report. They sighted concerns about losing scholarships; some felt their abuse was “not bad enough” to rise to the level of reporting.

Almost all of the athletes who experienced sexual abuse or harassment said it had a negative impact on one or more aspect of their lives: financial, academic, health, or social.