An animated panel titled, "The Economics of Diversity, Equity and Inclusion," focused on the economic cost of ignoring DEI issues and the positive impact of embracing them. 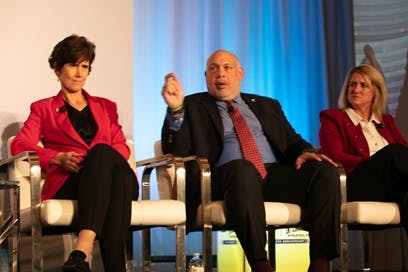 “If you’re in athletics or any part of sport, if you’re not talking about diversity, equity and inclusion, more importantly those are the tenets of belonging, you’re behind the times,” said Frazier. “Students’ voices, activism, it’s a part of our culture and American society.

“If you take a look at the economic components of this, as we recruit, especially at NIU, we’re recruiting multi-ethnic racial classes coming in,” he continued. “This is a business decision. We look at the students coming in and they are diverse.

“They have a mindset that diversity is a part of their lives. If you do not have the supports and the accommodations and the things that are necessary for recruitment and retention, you’re going to be classed out. … If you can’t reach that audience, you’re not going to be in business.”

Pat Chun, athletic director at Washington State University, said he reaches out to minority-owned businesses to engage with the athletic department and its programs.

“You have to have a very open process to try and track partners,” said Chun.

Chun also noted that ideas around DEI can be presented to donors. He mentioned a $25,000 donation the athletic department received that had no specific designation. When he subsequently shared with the donors that it went to a DEI initiative, they were thrilled.

“This is either adapt or move on,” said Chun, who noted that DEI is an everyday part of doing business. “We have to live our mission. … Everything we do and how we market ourselves, who we partner with and the initiatives we fund, we have to be a reflection and an example of the people we serve the most, which is our student-athletes.”

The gender inequities revealed at the 2021 NCAA Division I Women’s Basketball Tournament were discussed repeatedly throughout the forum. The NCAA conducted an external gender equity review, said Amy Wilson, managing director for inclusion at the NCAA.

Wilson said much effort has gone into examining gender equity. It was recently announced that starting in 2022, the field for the Women’s Tournament will be increased from 64 to 68 teams. Across the national office work has been done.

“It’s given us an opportunity for progress,” said Wilson. “Some of the things that aren’t getting publicized are hundreds of hours of budget meetings where we’re literally going through the men’s and women’s basketball budgets line by line by line and asking questions, ‘What is this?’ Then, ‘Is it OK for it to be different? Should it be similar? Should it be the same?’ We’re asking those questions about everything.

“When we discover inequity, we’re immediately taking steps to make it right,” she added. “Then there are meetings with our CFO, our senior level basketball leadership…and our divisional level leadership.

“We’re making change right now. It can’t just be we get March and April right in 2022. This needs to be a long-term commitment to systemic change.”

One of the recommendations from the first phase of the report was to create a gender equity impact statement. What was created is a gender equity evaluation process, which will be a form that anybody in the NCAA office as well as committees can use. It will be considered policy and legislation across the association so there is careful evaluation in a proactive way.

“When you’re talking about generating revenue, there’s a correlation between living your values,” Wilson said.

On Wednesday, NCAA President Dr. Mark Emmert did his annual one-on-one interview with Sports Business Journal publisher and executive editor Abraham Madkour. Emmert noted that 35 states now have Name, Image and Likeness (NIL) laws. He has spoken with members of Congress about the progress toward a national law, and at this time he is not optimistic it will happen in 2022.

Booker said NIL is bringing “a new dimension to college athletics.” He said he still places a priority on excelling on the field. When asked about mental health, Booker said that while resources are presented from freshman year, some student-athletes often feel too busy to take advantage.

“Being a student-athlete, there are so many other things distracting from your time and attention,” said Booker. “For them, to be able to have been presented about what kind of resources are available is huge. Also, destigmatizing reaching out for mental health is super important and having that be a frequent conversation is really important because it kind of lowers the fear that people have talking about that.

“I dealt specifically with social justice topics as well,” he added. “Athletes are usually kind of reluctant to talk about it. I know I was when I was in high school because I didn’t want to rock the boat the wrong way. As I got into college, I saw some of my peers say their viewpoints and perspectives, and it became a lot easier for me to see myself doing it.” 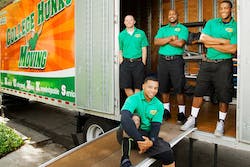