Anyone familiar with inner city neighborhoods has probably noticed the number of alcohol-selling businesses located on block after block.

Growing up in Philadelphia, Dr. Loni Philip Tabb was aware of the proliferation of such outlets.

“I am from the inner city, and I grew up where you might have access to “forties” (40-ounce bottles of beer) and different types of alcohol – but not fresh fruits and vegetables,” she explains on her Drexel University profile.

Those memories and observations have guided her research interests. As a high school student, Tabb also knew she had a passion for math, but she recalls being confused.

“I didn’t know what people who liked math do,” she says. She initially followed the path preferred by her Caribbean-born parents, to pursue a career in business, entering Drexel University as a business major, but the passion just wasn’t there.

“So I started digging and I found out about biostatistics and how I could use my math and statistics training in public health and medicine,” Tabb tells Diverse, adding that, when she went home and told her mother that she planned to study biostatistics, her mother first said, “Why?” but then told her to “go for it.” 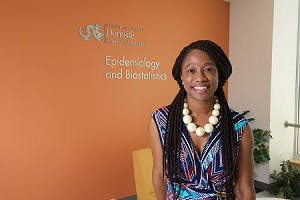 That’s exactly what Tabb has done. She not only completed her bachelor’s degree in mathematics at Drexel, but she went on to earn a master’s in math there and then a master’s and Ph.D. in biostatistics from Harvard.

Despite Tabb’s impressive qualifications, the decision to apply to Harvard took persuasion from one of her Drexel mentors, Dr. Ewaugh Finney Fields.

“I thought Harvard was not a place for somebody like me,” Tabb recalls. “She told me, ‘You can make it for you,’ and that’s what I did.”

Much of Tabb’s research has centered on the availability of alcohol and its link to violence in urban communities.

When she joined the faculty at Drexel, Tabb remained concerned about those neighborhoods.

“A colleague of mine and I talked about the landscape of urban living and one of the things that came up was alcohol advertising and how it’s not by chance alone that in certain pockets of the city, especially here in Philly, that certain neighborhoods are inundated with places that serve alcohol, whether that is a corner store or whether that is a beer and wine distributor or night clubs and … whether you drink it there or you take it home,” she notes.

Her research has borne out the connections, which are especially relevant as Pennsylvania moves from state-run liquor establishments to privatization.

Tabb is also interested in overall health issues affecting people based on location.

“When we think about health, gone are the days where you simply use the lens of individual levels, such as blood pressure numbers,” she explains. “What also matters is where you live. You can be the healthiest person, but if you get plopped into a neighborhood where you literally have no access to fresh fruits and vegetables, crime rates are so high you can’t go out and take a walk, even if your health was top notch, the longer you live in that neighborhood, unfortunately, the worse your health outcomes are going to get.”

Tabb’s recent research is focusing on those broader issues — understanding how the area in which we live impacts our health, using spatial statistics and epidemiology.

In her teaching, Tabb says she attempts “to use everyday examples to show the students why we’re doing these calculations.” Her efforts have been rewarded by her students and colleagues in Drexel’s Dornsife School of Public Health.

Tabb says her goals are to influence public policy and to encourage young scholars to study biostatistics and other STEM disciplines.

“I like academia because it gives me the flexibility to research the problems that I think matter the most,” she says, “and to do what I think is most important, what lines up with my moral values.”