Pearl Stewartcmaadmin (EDU)
Dr. Gerald Griffin developed a deep interest in biology as a teenager growing up in Opelika, Alabama, where he also excelled in swimming, Taekwondo and music and toured Europe in college with the United States Collegiate Wind Band.

Fast forward a couple of decades, and the multi-faceted scientist has found ways to merge his varied interests, particularly science and music.

At 38, Griffin is an associate professor of biology and psychology at Hope College in Holland, Michigan, teaching and conducting research with his students in the interdisciplinary neuroscience program, which he directs.

“I’m really interested in how the nervous system is impacted by infection,” says Griffin. “I investigate the reciprocal interactions between herpes simplex virus type I (HSV-1) and the nervous system.  More specifically, I am testing the hypothesis that a latent infection of HSV-1 modulates behavior and pathological hallmarks of dementia.”

Drawing upon his background in music, Griffin has developed a creative pedagogic approach to Introduction to Neuroscience at the private, four-year college. 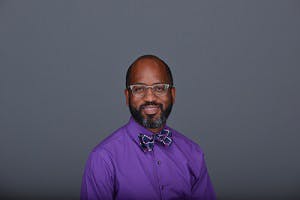 He explains that in this exercise, the musical whole notes represent all the neurochemicals traveling the synaptic cleft; the half notes are the neurotransmitters and quarter notes are specific neurotransmitters, such as glutamate. Students are asked to conduct extemporaneous research using their smartphones and then present to the class as they learn (thus evoking the “jazz” metaphor of impromptu performance).

To the lay person, the concept may seem labyrinthian, but Griffin says with a laugh, “The students understand it,” explaining that a number of them are biochemistry majors, with a music minor.

After graduating from Cornell, Griffin earned his doctorate in neuroscience at the University of Pennsylvania’s school of medicine. He completed postdoctoral training in the department of microbiology at the Penn, where he focused on how herpes simplex virus Type I (HSV-1) regulates neuronal gene expression.

Griffin, who holds appointments in both the departments of psychology and biology at Hope, explains his current work as a labor of perseverance. “What we’re doing now is we’re focusing on trying to find something better than a correlation,” he says. “Can we move this to a model where we can actually determine causation? That’s my holy grail, if you will. I’m going to keep pushing every day, inch by inch, [toward] understanding how the virus is impacting neuroactivity; how is the virus impacting certain proteins in the brain that might be modulating behavior?”

Despite his explorations in the rarified space of neuroscience, Griffin remains true to his Alabama roots. After completing his postdoctoral work at Penn, Griffin chose to return to Alabama for several years to teach biology at Tuskegee University, a historically Black institution widely known for achievements in the sciences including the research of botanist George Washington Carver.

“I was looking to return home and to contribute to a place that had [educated] members of my family and my community,” he says. While there, Griffin reached out to middle and high schools, hosting summer science programs on campus. “We also designed educational modules to teach aspects of science to middle school students,” Griffin said, adding that the lesson plans remain online for teachers throughout the state to use.

In 2015 he moved to Hope College to fill a position in its interdisciplinary neuroscience program.

Griffin’s colleagues commend his innovative and energetic interaction with students. “Gerald is both popular and well-respected among students,” says psychology professor Dr. D. Charles Green.  “He does a particularly good job of placing the things he teaches in a real-world context. All of Gerald’s research is interdisciplinary, transformative, and integrative.”

Adds Green: “He mentors them as young scientists, preparing them well for future work or graduate study.”

This article appeared in the January 24, 2019 edition of Diverse.