Walter Hudson
Feb 6, 2019
Growing up in the mostly immigrant community of Pico-Union in Los Angeles, Dr. Cynthia V. Flores was surrounded by those who had a strong work ethic and an “expressed value in education,” although many had not graduated from high school, let alone college.

“I grew up observing lots of hard work,” says Flores, who is an assistant professor of mathematics at California State University Channel Islands, where she teaches courses on scientific computing, differential equation, and supervises undergraduate research. She is also a rising star at CSU Channel Islands, where she was named the 2018 Business & Technology Partnership Faculty Leader of the Year.

A co-principal investigator of a $2 million grant from the National Science Foundation that focuses on increasing faculty representation in STEM, Flores says that she is committed to ensuring that the field is diverse.

“I think about how I can create a pipeline so this path is more accessible to others,” she says.

Flores’ interest in mathematics blossomed when her father insisted that she and her younger sister join him at the flea market every weekend where the family sold goods for a living.

“I was the designated cashier,” says Flores, who, at the tender age of seven, was perfecting her math and developing social skills by interacting with the customers. 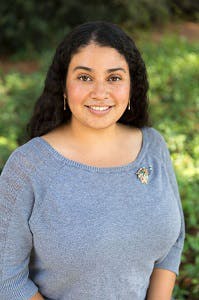 “In his own way, my Dad said, ‘you’re good at math.’ He didn’t say those words, but he would give me lots of dollar bills and say, ‘you’re the cashier and you’ll provide the change.’ And even if I would complain and say I didn’t want to carry that much money, or ask if my sister could do it, he would always tell me, ‘you’re fast, you do it right, and in his own way, he was telling me that I was good in mathematics.”

That constant encouragement would prove useful to Flores, who would go on to develop a passion for the subject, defying stereotypes from high school teachers who wondered why a young Latina girl from an urban area performed exceptionally well in mathematics.

“I had some struggles in high school,” says Flores. “I had math teachers who were not convinced that the work was my own.”

Thanks to the support of a high school counselor, Flores enrolled in a college algebra class at a nearby community college where she continued to hone her skills.

“That was a really key moment for me when I realized, ‘Wow, in college I’m not going to be questioned for my work.’”

By the time Flores entered California State University Northridge as a first-year student, she was convinced that she would someday become a high school mathematics teacher and seemed content with a professional career choice.

“I didn’t have a role model in high school, and I wanted to be that for other people,” says Flores. “I didn’t have someone who understood me, where I came from, my struggles.”

But then she met Dr. Maria Helena Noronha, a math professor at CSU Northridge, who took a keen interest in her abilities and was impressed. Noronha suggested that she might consider a career in higher education and encouraged her to become a doctor.

“At this stage in my life, my first reaction was, ‘I don’t do really well when I see people bleed,’” recalls Flores with a laugh. Noronha quickly became Flores’ mentor and schooled her on the difference between a medical degree and a philosophical degree and helped her realize that the path toward earning a Ph.D. was accessible.

The first in her family to graduate from a four-year institution (Flores’ mother later returned to college to earn a degree), Flores stayed at CSU Northridge to earn a master’s degree. She then enrolled in a Ph.D. program at University California Santa Barbara where she earned a doctorate in 2014 and immediately went on the job market, securing her first teaching position at CSU Channel Islands.

Flores says that she has found a supportive home at CSU Channel Islands, a Hispanic Serving Institution with a diverse student body.

“Channel Islands was a great match for me,” she says. “I get the opportunity to prepare generations of evolving minds.”

As a mathematical researcher, she has worked with undergraduate and graduate students to address some of the most pressing problems in her surrounding community.

She says more work has to be done to encourage women majoring in STEM fields.

“There is a lot of curiosity and I’m happy to be that resource, because if I’m not, they may not get all of the answers they’re looking for,” she says.