Leaders of a private, predominantly Black college-prep school in southern Louisiana are defending the K-12 institution against allegations of emotionally and physically abusing students and falsifying academic records, saying the accusations are untrue and smear the institution’s good reputation.

Michael Landry, who along with his wife Tracey founded T.M. Landry College Preparatory, and board members Greg Davis and Linda Johnson said there were inadvertent clerical errors on some academic records, but there has been neither academic fraud nor abuse at the Breaux Bridge school. 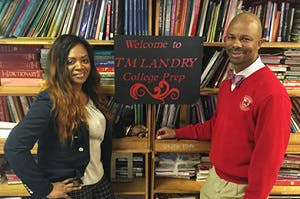 A New York Times report Sunday, the latest in several stories on the subject since last fall, said an unnamed source indicated that the Federal Bureau of Investigation is probing the coed school as a result of the newspaper’s reporting, and that Louisiana state police also are looking into claims that students were hit, choked and physically abused in other ways.

The FBI typically does not comment on whether it is conducting such investigations, and a state police spokesman did not respond to contacts from Diverse on Monday.

Landry, Davis and Johnson said they have not been contacted by the FBI or by police.

The year-‘round day school garnered national attention and has been featured on national television shows such as “Ellen” and “Today” as its graduates have gained admission to elite institutions ranging from Providence, Spelman and Morehouse colleges to Harvard, Emory and Bucknell universities.

According to the Times coverage – based on interviews with dozens of past and current students, parents, former teachers and law-enforcement officials – school officials doctored transcripts and padded some students’ college applications with fake clubs, phony classes and hard-knock-life tales embellished or fabricated to impress college admissions officers.

In a 2012 case in which he was accused of dragging, choking, striking and slamming a male student onto the floor and making him kneel, Landry pleaded guilty to a count of battery and received probation, according to the Times. Landry, who teaches at the school, said he had only spanked the student and denied claims that he physically abused students.

The school hired a New Orleans law firm to conduct an internal investigation into the allegations published in the Times, posting the findings on the school’s website in April.

“We are a college prep school,” said Landry. “We don’t abuse kids. We have parents who are police officers.”

Landry said he sometimes raises his voice at students to motivate them, but he doesn’t scream or curse. The school also doesn’t believe in suspending students, he added, a practice that has been criticized in recent years for use against Black students.

“At the end of the day, what upsets me is it’s okay for football coaches, baseball coaches, basketball coaches to drill students and make Black kids run up and down the field or court and never get a scholarship,” he said. “But we are being taken to the woodshed because we motivate and expect our kids to do well academically.”

Landry and Davis said the accusations against the 14-year-old school began after several employees suddenly quit last summer and started their own school, luring away 50 to 60 of Landry’s 186 students. As word of the published allegations spread, the academy’s enrollment dwindled to below 70 students, they said.

The STEM-heavy school is trying to bolster its reputation, putting some reforms in place and increasing its academic rigor, said Landry. It is raising its graduation-required ACT score from 27 to 28, for example, and will begin mandating that all students complete at least a first-level calculus course.

In a state where only about 2 percent of Black students are STEM-ready by the time they leave high school, Landry said, the rate at his school is 85 percent and for the last two classes was 100 percent.

“Roughly 80 percent of our kids are in college and they have done well,” said Landry, adding that students learn languages ranging from Latin to Mandarin and can earn credit in online classes at Stanford University as well as college classes in biology, calculus, accounting and honors English at the University of Louisiana-Lafayette.

“We’re getting pounded because we are a Black school and people are saying there’s no way these Black kids can do this here, can score past Calculus II,” said Landry. “We’re doing it. Our kids are doing phenomenal things. We’re not a traditional school, we only care about excellence.”

Johnson, who served on the state’s Board of Elementary and Secondary Education for 13 years, including three years as president, said she encountered “the most articulate Black children I have ever seen in my life” when she first visited the academy in 2017.

She said the school’s strong results in academics are fueled by an emphasis on proficiency in STEM fields, which in turn fuels proficiency in logic and reading.

About 45 Landry graduates are currently in college or have graduated, many in fields such as physics, computer science and applied mathematics, said Davis, the school’s board chairman.

“We’re doing things traditional school isn’t doing with Black children, especially Black boys, and instead of embracing it, we are under attack,” he said. “This is a very serious fight, trying to save the lives of Black children, especially Black boys in the prison pipeline, from the gross failure and gross underachievement in traditional public education. There are many people that are with us, but they’re scared to stand with us publicly because everybody is afraid of the New York Times. And we don’t have the resources to fight back the way you need to fight back when it’s the New York Times.”