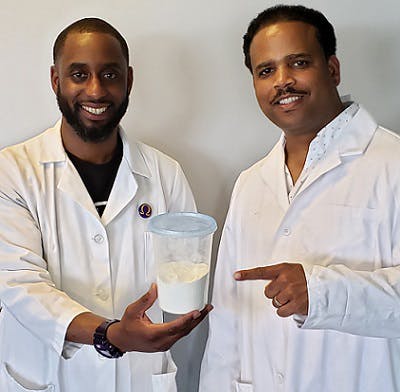 Researchers at Tuskegee University have modified and discovered new bio-based natural materials that could eliminate the harmful buildup of carbon dioxide in the atmosphere.

Scientists worldwide agree that a rise in carbon dioxide is contributing to global warming. Since the beginning of the Industrial Revolution, researchers have observed significant amounts of carbon emitted into the atmosphere — with the concentration of carbon dioxide at an all-time high today. But scientists remain unsure just how much human activity is contributing to the warming.

Curry and White, with grant funding from the National Science Foundation, have created a new means of capturing carbon dioxide from the atmosphere that promises to be more effective, environmentally friendly and less expensive than carbon-capture methods currently used.

Instead of increasing the rate of carbon dioxide removal through changes in land and forestry usage and geoengineering techniques, the Tuskegee-developed technology relies on materials taken from agricultural waste products called nanocellulose.

“Nanocellulose is a natural material that can be found in abundance on this planet,” Curry said. “Using this material to develop new technologies for the capture and storage of carbon dioxide will only push the boundaries of science toward the development of new systems that promotes a cleaner and cooler atmosphere.”

The researchers’ process relies on using naturally occurring plant-based materials as filters to remove dangerous carbon dioxide buildup in the atmosphere. And if the new technology is used to reduce carbon dioxide, the natural material can be reused in the environment for remediation.