When Alimah Dawkins first found out she was accepted to Sarah Lawrence College (SLC) — one of the priciest schools in the nation — she was elated. 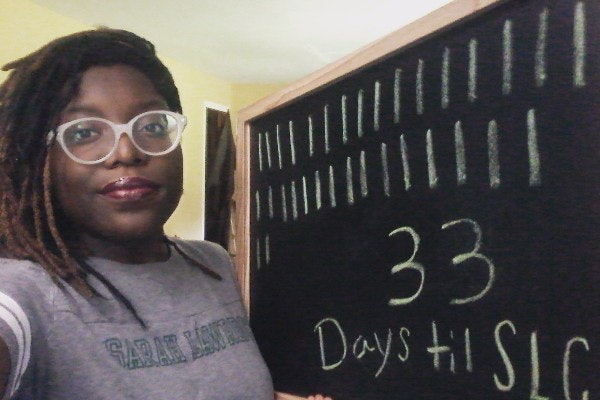 Alimah Dawkins raised $1,835 through her GoFundMe account to help with college expenses.

“Apparently, I was audibly ecstatic, as the counselor said I was the most excited student she’d called that day,” Dawkins recalled of the phone call she received from an admissions counselor at SLC one evening in late January, informing her that she had been admitted.

But this summer, when it came time to actually move from Atlanta to New York to attend SLC, Dawkins realized that she didn’t quite have the resources she needed to make the trip.

So, like a growing amount of college students, she turned to GoFundMe in late July to see if she could appeal to others for help.

“The good news: I got into my dream school!” Dawkins wrote on her GoFundMe page.

“The bad news: I’m extremely ill-equipped to travel to and live in New York, so as a last resort I’m asking you to help me get what I need to survive at Sarah Lawrence College.

Dawkins’ succinct plea for help paid off in a major way. Within 12 days of creating her page, she raised $1,835 — several hundred dollars more than the $1,500 she was seeking to make the move to New York.

“The vast majority of donations came from Sarah Lawrence students and alum,” Dawkins told Diverse, “especially after a current student spotted the fund and reached out to me as a fellow student of color.

“She wanted to share the fund with her network of students and, within two hours of sharing the link to my fund, it was up by $600,” Dawkins explained. “A few of my high school’s staff members donated as well as a couple friends from high school.”

While some experts say crowdfunding is an ineffective way to finance college, Dawkins never had any doubt that GoFundMe would prove effective with this tiny piece of her college expenses.

“I noticed that, even though my family lacked funds to support me, I had an extensive network of alum and peers who were able to help,” Dawkins said. “I knew that if I launched a fund that was accessible, people would donate.”

Dawkins, the second oldest of five children, said her parents were limited in what they could do to help.

“My mother — who works in sanitation and case management — does not have a lot of funds to go toward my college expenses,” she explained. “My father is a disabled veteran and unemployed at the moment.”

Though both graduated from college, she said, they ran into “plenty of obstacles what with them both being first generation students.”

“I am not the first in my family to attend college but it is very likely that I will be the first to graduate within four years,” Dawkins said.

Dawkins said she got a “comprehensive financial aid package” to attend SLC but still has a substantial amount to pay on her own.

She was awarded an Achieve Atlanta Scholarship, which covers $5,000 a year.

“For many students that is a lot of money, but for someone attending SLC — which is consistently ranked as the most expensive school in the country — that’s just the tip of the iceberg,” Dawkins said.

Dawkins said she hopes to study film studies and political science and to use film and TV as a “vehicle for social awareness.”

“I want to tell stories that are authentic and treat people of color less like props and more like people,” Dawkins said. “Later on, as a member of the academy, I will help artists of varied backgrounds gain the recognition they deserve.”

Dawkins — a diehard supporter of Sen. Bernie Sanders for president — said even though she got “exceptional financial aid” from SLC, “there is a larger issue in America where higher education is becoming increasingly inaccessible, especially for low-income students.”

Dawkins said the year 2016 has been a crucial year in her political development.

“I am and always will be a Sanders supporter,” Dawkins said. “Bernie Sanders has started a movement. Now more than ever young people are realizing that they can manipulate the system to their advantage rather than complaining about how corrupt it is.

“Bernie really reinvigorated people and the DNC sees that,” Dawkins said. “They’ve changed their stance on minimum wage and Hillary [Clinton] has been pushed to be more progressive, especially when it comes to free college.”

Dawkins believes her identity enables her to see things in a way that many others do not.

“Growing up in America, we are reminded of social injustices on an almost day-to-day basis,” Dawkins said. “Unfortunately, these issues are always presented in black and white, or rather, Black versus White.

“Thus, nuance is lost,” Dawkins said. “In our minds we eliminate the possibility of three or more positions existing and the two extremes that result rarely ever compromise.”

Those who helped Dawkins make the move to college can take satisfaction in knowing that they are contributing to campus diversity in more ways than one.

“As a Black, bisexual, poor woman, I live in a very complicated intersection of identity politics,” Dawkins said, “and that allows me to see grey areas that many do not.”