I was six weeks old when my mother was shot and killed on the front porch of our home in Chatham, a neighborhood on the South Side of Chicago. She had stepped outside to smoke a cigarette. A man was walking down the street when a vehicle approached him from behind. The man jumped over our fence as shots rang out from the car’s windows. 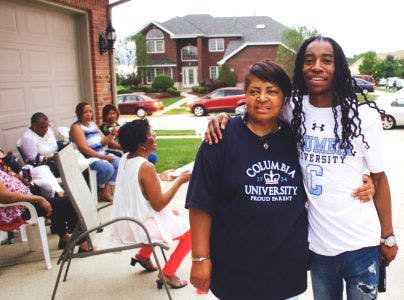 My mom was struck by one of the bullets and died. My grandparents, who were inside the house watching me, still grieve their middle child, 22 years later.

My grandparents raised me in that same home. They’ve invested everything in me, my education and my career. If it wasn’t for them, I wouldn’t be where I am now, working toward a graduate degree in journalism at Columbia University in New York City.

If it wasn’t for them, if they didn’t miss me so much when I’m away, I’d never visit home.

I was heartbroken to learn that Arshell Edward Dennis, a 19-year-old student at St. John’s University, was shot and killed earlier this month in Chicago while he was visiting his ailing mother. He died just hours before boarding a plane to go back to school.

It’s hard to ignore the parallels: We’re both from the South Side of Chicago, we both chose to attend school in New York, and we’re both aspiring journalists. What happened to Arshell is something I think about too often. For most college kids, going home is joyous, or at least mundane. It is a chance to wash laundry and catch up with old friends. It is a chance to see parents or grandparents, and to feel safe.

For me, going home is more complicated. I love my city. But I’m from a high-crime neighborhood. When I go home, I feel anxious. I’m worried I will get shot.

Like some other major cities, Chicago is experiencing an uptick in violent crime. According to the Chicago Tribune, 455 people have been killed in the city this year, putting it on track to surpass last year’s numbers. In Chatham, the homicide rate is 74 per 100,000 residents — more than 16 times the national average.

When I was a young child, I didn’t know that Chatham was a violent neighborhood. My grandparents were strict; they drove me to elementary school everyday, fearful of what could happen if they allowed me to walk four short blocks to get there. As I got older and became less sheltered, I saw how frequently gunfire would steal young lives and devastate families in my neighborhood. I wanted to escape the violence.

In 2012, after I graduated from high school, I left Chicago to attend Morehouse College in Atlanta. It was my first time away from home. I felt safe there.

During my first semester, I got phone calls and text messages from friends back home, telling me about acquaintances who had been shot. As a teenager, I had performed with South Shore Drill Team, a non-profit organization with a mission to keep kids active and off the streets. Kids who participated in this program with me were dying.

I came back to Chicago that Christmas terrified to leave my house. I worried I’d get caught in crossfire. Or that I’d come home to learn that something horrible had happened to my grandparents.

A few weeks after I returned to Atlanta to begin my second semester, in January 2013, a high school friend called to tell me that Hadiya Pendleton, a former bandmate and a freshman at the high school I had attended, had been shot and killed. Her death made national news. She was killed one mile from President Obama’s Chicago home, days after she performed at his inauguration ceremony. I knew Hadiya. This one was too close to home.

Shortly after Hadiya’s death, I decided to avoid going back to Chicago whenever possible. I got a job, an internship and I rented an apartment. Over the next three years, my visits became more infrequent. I kept myself busy so that I’d have a good excuse when friends and family would ask when they’d see me again. I didn’t go home at all during my senior year.

Now, as a 22-year-old graduate student living in a safe neighborhood in New York, I still worry about getting shot. Living away from Chicago helps me to quiet those fears, but I was raised in a place where gunfire can find you when you’re not looking for it, even when you’re standing on your front porch. Feeling completely safe is a luxury I fear I’ll never have, no matter where I am.

I know I could have just as easily met Arshell’s fate, that a bullet could have just as quickly kept me from my first year of graduate school. As my grandparents grow older, I worry for their safety, too. My grandmother often talks about moving back to Louisiana, where she moved from in the 1960s. I encourage her to do it.

They still live in the home where they raised me, where their daughter was killed. She took her last breath on the same porch where my grandparents sit on cool summer nights. It is the same porch they stood on to see me off the last time I went to visit. I don’t know when I’ll be back.

This article appears courtesy of The Trace, an independent, nonprofit media organization dedicated to expanding coverage of guns in the United States.