College-age millennials—around 78 million people between the ages of 18 and 34—may be credited with helping to give President Obama decisive backing in his 2008 and 2012 national election victories. 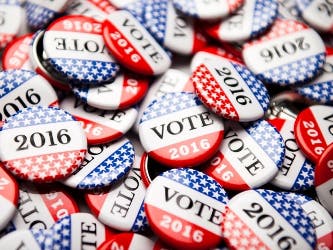 Today, to whom the college voters among that group will pledge their allegiance this fall, and vote for in November, seems less than decided with just two months to go before voting time, say college academics and students.

While some institutions are still in the early stages of opening their doors for the new school year, the absence of an Obama-like candidate and a widely held lack of excitement for the leading presidential candidates suggest tough going for all candidates in this year’s elections, even on many of the nation’s campuses where active voter registration campaigns are afoot, observers say.

Campus leaders at some schools say neither of the leading candidates—Democrat Hillary Clinton or Republican Donald Trump—seem well-enough connected to issues of importance to college students, dampening general enthusiasm about the national elections and prompting some to focus on other important election issues and candidates.

“I feel like I’m walking on eggshells,” says Cristobal Rocha, president of the College Democrats at New Mexico State University in Las Cruces, New Mexico. “It’s [the presidential race] become a hot topic,” debated on campus, in bars near the campus and most anywhere else, says Rocha.

“A lot of people are on both sides,” says Rocha of his peers at the 18,000-student, half-Hispanic institution.

“They are not my favorite,” says Nathalie Bravo Batista, a 20-year-old junior biology and chemistry major at North Carolina Central University, echoing students interviewed on nearly a dozen campuses across the country.

“When that kind of situation happens, you have to vote for the least crazy or most convincing,” says Batista, president of Raices, the only Latino/Latina student organization at the Raleigh-based public university.

“It was politically disappointing,” says 23-year-old Prairie View A&M University alum Brennan Wells, speaking of the two national party political conventions this summer. It was the first chance for Wells and some of his peers to get an up-close focus on this year’s elections.

Wells, who was selected for a nonpartisan volunteer internship at one of the major political conventions this summer, says “there was ample opportunity” for candidates Clinton and Trump “to make headway with people of color” and “they didn’t connect,” in his opinion. “Now, we’re choosing the lesser of two evils.”

Trump recently made appeals to people of color,” says Wells. “But it was too little, too late.” Wells says he planned to return to his campus this fall in between job hunts to help in campus voter registration and participation efforts as he did when he was a student.

“Political involvement is an everyday thing,” says Wells. “It has to be year-round.”

“We’ll support our national candidates, but this fall we’re putting energy into the local elections,” says Jones, saying the student group will focus on the race for governor, lieutenant governor and Congress.

“I’m not that excited about the presidential election,” says Jones.

Indeed, regardless of campus, Jones and other student leaders say neither Clinton nor Trump have effectively addressed what students consider top student issues—tuition costs, student debt, large corporations, jobs beyond college and society diversity—as well or effectively as Sen. Bernie Sanders, who was among those running for the Democratic nomination for president.

The candidates are missing how important most college-age millennials believe that the race issue is in America, particularly the police brutality incidents that spread fast and wide via social media and the debate over immigration policy, several millennials say.

“You see it all over the place,” says Jones, referring to the incidents of police misconduct that she feels are more public than in past decades as a result of more widespread use of mobile camera devices. “As Black people, we can’t push it aside.”

Lorraine Lucas, a 24-year-old law school student at Louisiana’s Southern University, was a student volunteer at one of the political conventions this summer. She also voices concerns about whether the candidates truly grasp how important the police brutality issue is for young Blacks and others.

“They just want to be heard,” Lucas says of young African-Americans’ appeals voiced by campaigns such as Black Lives Mater.

For sure, as Wells, Lucas and others suggested, students need to look beyond the November election.

“We have a lot of rhetoric, protests and a lot of rallies,” says Lucas, a vice president of the campus chapter of the historically conservative Federalist Society. “We don’t exercise our right to vote as we should,” she says, adding she planned to get involved in campus voter registration efforts this fall.

At Delaware State, meanwhile, Jones, who says she hopes to pursue a Ph.D. in sociology, says her group is in discussions with others at the school about collaborating on issues they could collectively pursue past November, such as ways to address student debt, Islamophobia and Black empowerment. She says she hopes to see more “focus on issues and less on politics.”

At Virginia State University, in Ettrick near Richmond, political science major Brittany McCoy is helping stir up interest in this fall’s election, she says, having been energized by her ability to participate this summer as a political conventions volunteer sponsored by the Thurgood Marshall College Fund.

“We’re trying to find more creative ways to get people to register [to vote],” says McCoy. “I haven’t met anyone who doesn’t want to register to vote.”

Some anticipated barriers to voting are being removed by federal courts. This summer, a federal appeals court declared illegal a new North Carolina state law its sponsors say was aimed at millennials at major campuses around the state.

Minorities of all color had aggressively opposed the new law that they claimed would be especially hard on them, Joyner says.

Courts have taken similar action on voter election identification laws in other states this summer.

Indeed, what has evolved into a series of unexpected twists and turns on the nation’s political roller coaster appears to have diminished student enthusiasm about this year’s presidential candidates and raised questions among younger college students about whether the candidates really connect with issues of most concern to students.

With Election Day—November 8—rapidly approaching, Clinton and Trump have their work cut out for them, interviews suggest.