This is the story of Lizbeth Mateo, a young, bright Indigenous woman from Oaxaca, Mexico, and a recent graduate from the Santa Clara University School of Law, who today finds herself under threat of imminent deportation.

There was a time when young brown peoples lived in the shadows, avoided the light of the day, and avoided all manner of authority and government officials.

And yet they dreamt. They always dreamt.

This wasn’t just any kind of young brown people. These were young brown students who had been brought into the country as either infants or as children, without, according to the U.S. government, the legal right to live in this country. 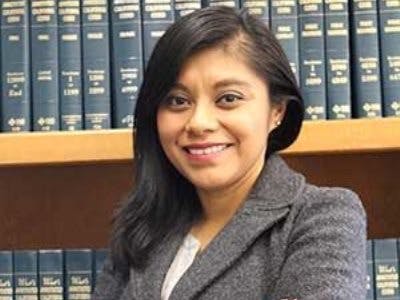 One day, they got tired of living in hiding, lost their fear, they stepped forward and began to assert their rights as full human beings and began to fight back guerilla-style; Zapatista style.

And then one day in 2010, after Congress again failed to pass the Development Relief and Education for Alien Minors (DREAM) Act, they also got tired of fighting in the shadows and thus, one day, five of them made the decision to sit down and unmask themselves, proclaiming to the world that they were both “undocumented and unafraid.” This Act would have permitted students, who had grown up in this country and who had completed their schooling here, to go to college without the threat of deportation and at the same tuition rate as in-state college students.

Where they chose to sit down were the Tucson offices of Sen. John McCain (R). Lizbeth was one of the five. This historic action included telling the world, and demonstrating it, that they were also not afraid of the immigration authorities. And, sure enough, the authorities came, arrested them and took them away, though, in short order, they were released. That action was like that proverbial shot heard around the world.

They had taken on the machinery of the world’s greatest power ― did not get deported ― and thus energized DREAMERS everywhere in at least two countries. They unmasked themselves and began to defend themselves in public and, even more important, no longer relied on others to speak for them. People took notice, and, after a series of similar actions throughout the country, in 2012, President Barack Obama eventually signed the DACA (Deferred Action for Childhood Arrivals) executive order, under which as of today some 750,000 students have been able to qualify. And yet DACA was never enough, considering that there are between 11 million and 12 million people in this country without legal documents.

In 2013, nine DREAMERS crossed into Mexico, with the expressed intent of crossing back into the United States, thereby challenging the rule that those seeking to regularize their immigration status cannot travel freely back and forth, without risking their status and without the threat of deportation. Mateo, too, was one of the “Dream 9.” After their historic and dramatic crossing, they were detained by immigration authorities for an unprecedented 17 days and were finally released after much worldwide pressure and after successfully going through interviews where they were able to demonstrate a reasonable fear of persecution. All filed for asylum.

For Mateo, a California State University at Northridge graduate, this release permitted her to enroll at the Santa Clara law school. Three years of diligent study and work, which included representing the poorest of the poor, resulted in graduation with distinction from her law school this May.

And now, in a dramatic turnabout she has been informed by Department of Homeland Security officials that the program that she fought for and sacrificed for ― DACA ― is being denied to her, precisely as a result of crossing into Mexico as part of the DREAM 9 action in 2013. She has been given until Tuesday, Oct. 11, to respond.

Raul Al-qaraz Ochoa, a migrant rights activist, who also took part in the sit-in at McCain’s office, whose goal was to demand that government work in the community’s interest, had this to say: “Lizbeth embodies the values that will bring about a transformative change. That must be encouraged and embraced, not punished.”

If anyone has earned the right to remain in this country, particularly as a practicing attorney, it is Lizbeth Mateo, someone who embodies the truest sense of what it means to be a great human being. As a leader, she has left indelible footprints on her justice path, particularly for others. “That’s the hardest part for me, knowing that I have lots of support, but there are others that don’t,” Mateo said.

Erika Andiola, who herself waged a valiant nationwide struggle to rescue her mother from the clutches of the migra several years ago, weighs in on Mateo’s struggle: “Leaders like Lizbeth Mateo have been in this fight for many, many years. She deserves to have DACA.” To support her, please go to this page and sign the petition.