Jamari Green has fond memories of the day she got word from the UNCF Koch Scholars Program that she had been chosen to receive one of its $5,000-a-year renewable scholarships.

“I was really excited because my freshman year I had to take out loans and it was difficult for me to pay for my books,” Green — a senior at Claflin University — told Diverse. 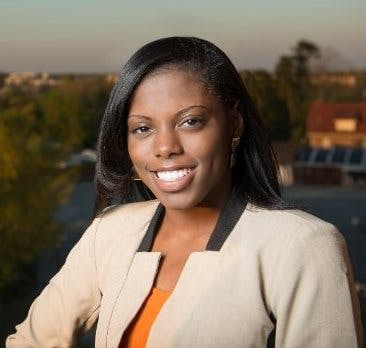 Jamari Green, a senior at Claflin University, credits the UNCF Koch Scholars Program with enabling her to pursue her entrepreneurial dreams.

“Going into my sophomore year, I didn’t want to take out another loan,” said Green, who says both her parents have struggled with unemployment. “The scholarship alleviated all of those issues and made me more at ease about continuing with my collegiate experience.”

Now a 4.0 business administration major set to graduate this spring at the top of her class, Green has a pending job offer from Deloitte — a global consulting firm where she interned this past summer.

She speaks of eventually starting a nonprofit to help students such as herself realize their collegiate and professional goals.

Her LinkedIn profile boasts a pair of internships with the U.S. Department of Energy and other notable awards. The most lengthy entry is the Koch scholarship, which she credits with encouraging and enabling her to pursue her civic entrepreneurial dreams.

Green counts a recent meeting with Charles Koch — one-half of the billionaire duo behind the $25 million UNCF gift — as one of the highlights of being a UNCF Koch scholar, which she describes as a “life-changing experience.”

“I never thought I would be able to meet a billionaire,” said Green, who says jovially that meeting a billionaire is something she can now cross off her “bucket list.”

Green’s interview with Diverse marks the first time that students from the UNCF Koch Scholars Program have been made available to speak with the media specifically about their scholarships since the program was announced amid controversy in 2014.

Then — as continues to be the case now — critics assailed UNCF for accepting a $25 million gift from Koch Industries and the Charles Koch Foundation, expressing worry that the Koch brothers, Charles and David — who have been known to back conservative and libertarian causes and politicians — would exert undue influence over UNCF, a nonprofit scholarship organization that supports private HBCUs.

An agreement between the Kochs and UNCF states that UNCF will administer the program but that an advisory board consisting of two UNCF representatives, two Koch representatives, and one faculty member from an existing school will review the scholarship applications. It also says they will select recipients based on their academic achievements as well as their interest in the program’s fields of study. Those fields include accounting, business, economics, engineering, history, philosophy and political science.

Green — a member of the inaugural cohort of UNCF Koch Scholars — looks at the situation through the lens of her personal experience. She says she is on track to graduate with only about $3,500 in student loan debt. That’s only a fraction of the average student debt for students who graduate from public or private nonprofit colleges. Without the scholarship support, Green says she would have accumulated at least $14,000 in student loan debt.

While Green is grateful for how the Koch brothers’ donation to UNCF — one of the largest gifts in the organization’s history — has enabled her to finish college with a low debt load and to pursue her business plans, others continue to fire intellectual salvos at UNCF for what is seen as an unholy alliance with the Koch brothers.

For instance, when Michael Lomax, president and CEO of UNCF, penned a recent op-ed with Charles Koch in which they expressed hope that “the example of two seemingly dissimilar leaders coming together to find common ground” could be a “powerful motivator for others,” it was met with a scathing critique that called UNCF’s leadership into question.

“UNCF was all but in the clear, two years removed from being blasted by black HBCU supporters and white sideline enthusiasts over a partnership funded by wealth created from oil, manufacturing and bad intentions,” wrote HBCU Digest founding editor Jarrett Carter Sr.

“But this letter, issued at this point in the nation’s tumultuous era of race relations, puts new cracks in the confidence of UNCF’s overview of this scholarship fund, and worse, the autonomy of its executive voice,” Carter wrote.

Critics have also expressed concern over the optics and propriety of UNCF accepting a gift from the Koch brothers, who have been associated with backing an agenda that includes voter suppression, union-busting, and quashing the minimum wage.

Critics have also questioned whether the Koch brothers wield an undue influence over institutions of higher education that they fund.

Those concerns escalated shortly after the UNCF Koch Scholars program began, when an audiotape of Lomax surfaced in which he supposedly “mocked” critics who accused the Koch brothers of conspiring to effect “mind control” over the scholarship recipients.

Such concerns are not entirely unfounded.

For instance, around this time last year, The Center for Public Integrity published a lengthy exposé that illuminated the Koch brothers’ “strategy to evangelize their gospel of economic freedom.”

Whether that strategy is at play within the UNCF Koch Scholars program is a matter of speculation.

In order to shine light on the subject, Diverse probed UNCF Koch scholars — including Green — for hints and clues as to whether they were — as a condition of receiving their scholarship — induced or persuaded to take any particular courses that stressed libertarian values.

There were no smoking guns.

Khristian Edwards-McCoy, who received a Koch scholarship in 2015, said he was not familiar enough with libertarianism or the controversy surrounding his scholarship to speak about it.

As a sophomore at Oakwood University in Huntsville, Alabama, Edwards-McCoy, a native of San Francisco, spoke of trying to grow a business that sells skateboard culture gear, such as hoodies, hats and the like.

One of the things scholarships applicants must do is pen an essay about entrepreneurship.

“They asked like various questions about how we see entrepreneurship and what type of people do we look up to as entrepreneurs,” Edwards-McCoy said.

“For me, my belief of an ideal entrepreneur is someone who’s able to combine their dreams and aspirations along with a business and take a risk to possibly be successful at their dream.”

Green said she was not required to take any particular courses at Claflin to keep her scholarship.

To keep the scholarship, Green says she had to maintain a 3.0 GPA and attend an online seminar that deals with entrepreneurship, innovation and economics.

Those requirements are already public on the Koch Scholarship Program application.

Green says it is wrongheaded to think that the Koch Scholars Program is somehow trying to indoctrinate scholarship recipients to become libertarian.

“There was a lot of controversy around the Koch brothers donating such an amount for the United Negro College Fund scholarships,” Green said. “Many people thought we were going to be taught to be Black libertarians.

“We haven’t been taught to be any type of libertarian,” Green said. “What actually happened was the scholarship program has taught us to be open to a marketplace of ideas and accept various opinions that may be put forth when it comes to being entrepreneurs.”

She expressed gratefulness to the Koch brothers for investing in her future.

“This investment has allowed me not only to make it through these three years of college but make it through and be the first person in my family to graduate, be a young adult who will soon be an entrepreneur and someone who is graduating at the top of her class,” Green said. “Without that, I could not say I would have made it this far,” Green said of the UNCF Koch scholarship.

Asked if she considered herself a libertarian, Green said, “No.”

“I would consider myself as a young adult that’s open to various viewpoints and open to learning new things and new ideas.”