Questions about the implementation and reach of President Trump’s executive order on immigration and refugee rights still roil, three days after it was signed.

The city of Rutland, Vermont, was prepared to welcome 100 Syrian refugees in a plan devised by city officials. Under Trump’s order, that is now in question. 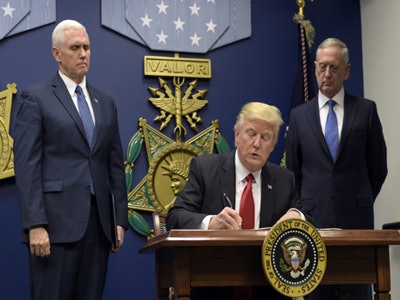 Among other actions, President Trump’s order bans refugees from entering the United States from the Muslim-majority nations of Iran, Iraq, Libya, Somalia, Sudan, Syria, and Yemen for 120 days.

Rutland faces a labor force problem shared by many isolated New England cities: an aging population that will be leaving the workforce over the next decade or two. In an effort to reverse demographic trends and bring in more residents with needed skills, civic leaders decided to welcome Syrian refugees.

“This was really a win-win situation, both for the Syrian refugees who would get a chance to start a new life in peace and security in Vermont, as well as for Rutland,” Dr. Samuel Liebhaber, associate professor of Arabic and chair of the Arabic department at Middlebury College, said on Monday.

“The town would receive an influx of presumably trained and professional people, who would then be able to start up homes and businesses, purchasing things from the local community. It really seemed like a nice matchup for the town.”

Liebhaber, along with Dr. Usama Soltan, a colleague in the Middlebury Arabic department, was involved in helping teach an Arabic language class coordinated by Rutland Welcomes, a volunteer organization. The class was one of many preparations the city made to prepare for the arrival of the Syrian refugees. It taught class-goers basic Arabic, to help local people interact with Syrians who might not yet be conversant in English.

With the executive order, however, Rutland may never see all 100 refugees. To date, only nine refugees had arrived, and under the order, refugees from Syria are banned for the indefinite future.

“It’s just heartbreaking to see Rutland’s plan evaporate for the time being,” Liebhaber said. “I hope the order is just a temporary thing and that it will be lifted.”

The 91 Syrian refugees who are now in limbo are just a small fraction of the number of people impacted by the order. Trump’s order applies to three groups: refugees from any country, who are barred from entering the country for 120 days; refugees from Syria, who are barred indefinitely; and citizens from seven Muslim-majority countries, who are barred from entering the United States for 90 days. Visa and green card holders are included in the ban. The countries in question are Iran, Iraq, Libya, Somalia, Sudan, Syria, and Yemen.

In addition to disrupting the lives of refugees and valid visa and green card holders, the order has far-reaching implications for U.S. colleges and universities. According to the Association of Public and Land-grant Universities, more than 17,000 students from the seven countries targeted by the executive order attended a U.S. university during the 2015-16 academic year.

“The new order is causing significant disruption and hardship to some university students, researchers, faculty, and staff who are citizens of the seven countries targeted and happened to be abroad at the time it was issues,” Dr. Peter McPherson, APLU president, said in a statement. “These individuals returned home to visit in compliance with the immigration designation they received, but are now stranded abroad and unable to return to their studies and responsibilities in the U.S.”

Niki Mossafer Rahmati, a current MIT undergraduate, posted on Facebook about her experience of being forced to return to Tehran on Saturday evening. She was on her way back to school after a break at home with her family in Iran. Her flight had a connection in Doha, where she was stopped, along with 30 other Iranian nationals attempting to travel to the U.S. on Saturday.

Among the group of Iranians stopped in Doha, Rahmati wrote, they “were old couples trying to go and see their children in the U.S., 2 old women trying to be with and help their pregnant daughters there for their third trimesters, students who had just gotten their visas and families who had sold their belongings back home so they could build a better life in the US. All these people had gotten visas legally and had gone through background checks.”

MIT said that 47 enrolled students are from the seven affected countries, and that two undergraduate students are currently barred from entering the country due to the order. The university is encouraging community members who might be impacted by the order to fly back to the United States by February 4 through Boston Logan Airport. Visa and green card holders are advised to fly to the United States through Boston because a Massachusetts judge’s order blocking the order offers more protections than similar orders elsewhere.

The order also applies to professors and instructors. Two University of Massachusetts Dartmouth (UMD) faculty members were detained in Boston Logan on Saturday afternoon due to the order, and were held for three hours before being released. The two professors in question, Mazdak Tootkaboni and Arghavan Loughhalam, are civil and environmental engineering professors and were returning from a conference in Paris when they were detained.

UMD officials issued a stern rebuke to the order. “Now that our colleagues are safe, we want to be clear that we believe the executive order does nothing to make our country safer, and represents a shameful ignorance of and indifference to the values that have traditionally made America a beacon of liberty and hope,” UMD interim  Chancellor Peyton R. Helm and Provost Mohammad Karim said in a statement.

Thousands took to the streets and airports of major U.S. cities to protest the order over the weekend. The New York Taxi Workers Alliance called on its members to not pick up passengers from JFK on Saturday night in solidarity with those detained or barred from entering the country. A federal judge issued a temporary stay of the order on Saturday evening, which would prevent detainees with valid visas or green cards from being returned to their country of origin.

Politico reports that, on Sunday, a consortium of religious organizations, including the Council for Christian Colleges and Universities, wrote a letter to Trump and Vice President Pence asking them to reconsider the ban on refugees. Under the order, the number of refugees that the United States will accept will be capped at 50,000 in 2017, less than half of the annual ceiling of 110,000 refugees put in place by President Obama.

“While the U.S. has in recent years received only a fraction of 1 percent of the world’s refugees annually, we believe the refugee resettlement program provides a lifeline to these uniquely vulnerable individuals and a vital opportunity for our churches to live out the biblical commands to love our neighbors, to make disciples of all nations, and to practice hospitality,” the letter read in part.

In the aftermath of the weekend, Trump blamed protesters, computer outages, and oddly, Sen. Charles Schumer, D-N.Y., for disruptions at airports. Taking to his wonted medium of communication, Trump posted to Twitter on Monday morning, “Only 109 people out of 325,000 were detained and held for questioning. Big problems at airports were caused by Delta computer outage, protesters and the tears of Senator Schumer. Secretary Kelly said that all is going well with very few problems.”

Despite Trump’s assertions that the implementation of the order has gone smoothly, many questions are still unresolved on university and college campuses, officials say. College and university officials from numerous institutions said that they are communicating with students, faculty or staff who might be impacted by the travel ban. Many are advising community members from countries affected by the order against leaving the United States, in the event that they would be unable to return.

“We’ve heard from a number of our colleges who are very concerned about the order,” David Baime, vice president for government relations at the American Association of Community Colleges (AACC), said on Monday morning. “The impact of it at this time, in terms of the numbers of individuals impacted, is unclear. It may not be tremendously large, but we certainly have some colleges that are concerned about people who are from those countries who have visas and would worry about leaving the country at this point in time.”

With regard to concerns about malicious actors potentially entering the United States under a student visa, Baime said that the AACC has been and continues to be committed to working with the U.S. Department of Homeland Security to ensure that no such thing transpires.

“We want to work with the administration in this area,” Baime said. “[But we also have concerns] about limitations against people who we certainly believe pose no threat to the safety of our citizens.”

Many colleges and universities have cautioned students and faculty from the seven countries included in the order against traveling until there is more clarity on the situation. In a letter to the university community, George Mason University president Dr. Ángel Cabrera urged the administration to reverse course.

“I am deeply concerned about this decision,” he wrote. “This is not only unbefitting a country built by immigrants on the ideals of liberty and equality, but it is also a self-inflicted wound that will damage the very innovation that lies at the root of our nation’s prosperity.”

Purdue University president Mitch Daniels released a statement on Sunday saying, “The President’s order related to immigration is a bad idea, poorly implemented, and I hope that he will promptly revoke and rethink it. If the idea is to strengthen the protection of Americans against terrorism, there are far better ways to achieve it.” \

Daniels was the governor of Indiana and served as director of the U.S. Office of Management and Budget under President George W. Bush.

Approximately 100 of Purdue’s 40,000 students come from the countries named in the order, and 10 faculty members are citizens of those countries. The university has cautioned community members against traveling abroad.

Staff writer Catherine Morris can be reached at cmorris@diverseeduation.com.