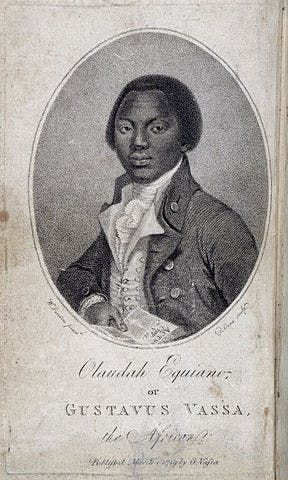 Shown is a page taken from Olaudah Equiano’s autobiography.

In honor of the 225th anniversary of the publication of Olaudah Equiano’s autobiography, Howard University held a panel discussion over the weekend where scholars gathered to celebrate modern day African-American scholarship, which they say can trace its roots and inspiration back to Equiano.

In the preface to his autobiography, The Interesting Narrative of the Life of Olaudah Equiano, or Gustavus Vassa, The African, Written by Himself, Equiano wrote: “I am not so foolishly vain as to expect from [this book] either immortality or literary reputation.”

Yet, the former slave and self-made man achieved just that.

Equiano’s narrative, widely read in colleges and universities across the nation, describes an early childhood in an Igbo village in present day Nigeria. According to the author’s account, he was kidnapped at age eleven and transported to the West Indies via the Middle Passage where he was sold into slavery. Eventually, he was able to save enough money to purchase his own freedom.

“There is no book like his,” said Harvard University’s Dr. Werner Sollors in an e-mail to Diverse. “He is among the first full Western autobiographers, publishing only shortly after Rousseau and Franklin wrote, and he gives modern readers a full sense of his individual interiority, his religious beliefs, his power of observation (the first snow!) and his political passion as well as of the particular strictures on Black subjectivity in England, but most especially in the English colonies.” Sollors is currently the Henry B. and Anne M. Cabot Professor of English Literature and Professor of African and African American Studies at Harvard.

In addition to celebrating Equiano’s autobiography, the Howard panel also honored present-day scholars and individuals whose contributions have helped to memorialize Equiano’s work.

Dr. Howard Dodson, who is director of the Moorland-Spingarn Research Center and Howard University Libraries, was presented the Darwin T. Turner Award by the African American Literature and Culture Society (AALCS) in recognition of his service. Past recipients of the award include Drs. Loretta G. Woodard, Maryemma Graham and Jerry W. Ward, Jr.

Dodson, who arrived at Howard University in 2012, previously served for 27 years as chief of the Schomburg Center for Research in Black Culture in Harlem and is credited with helping the Center double its holdings. Howard’s Moorland-Springarn Research Center, which celebrates its centennial this year, is recognized as one of largest and most comprehensive repositories for the documentation of the history and culture of people of African descent in the Americas and beyond.

“We chose Professor Dodson because we wanted to recognize his work preserving and disseminating African American literature and culture,” said Shirley Moody Turner, vice president of the AALCS and an assistant professor at Penn State University. “He is the catalyst for so much that gets done.”

During the panel discussion, Dodson stressed the importance of preserving Equiano’s story for generations to come at institutions like the Moorland-Springarn Center.

“What is significant about what is held in these archives is a people who were denied recognition of their humanity, a people who were claimed to be incapable of thinking and fashioning meaningful lives. … These people sought to leave a record of that sojourn,” said Dodson, adding that even if those living on the earth now do not have respect for the works housed at Moorland-Spingarn, they “do have the responsibility to have respect for the lives of the people and the lessons they have for us, whether you want to use them or not. You have the responsibility to at least engage them.”

Arthur Torrington, president of the Equiano Society of London, was also honored at the Howard event for his work in helping to promote awareness about Equiano’s life in the United Kingdom by helping to establish commemorative plaques at St. Margaret’s Church in Westminster Abbey and Riding House Street in London.

Equiano spent much of his formative years traveling across the Atlantic and in the Mediterranean as a seafarer. After securing his freedom, he based his operations out of London, where he was comparatively free from the harsh, discriminatory laws of the West Indies and colonial North America.

In the UK, the study of historical figures such as Mary Seacole and Equiano at the secondary education level was made compulsory in 2008. Last year, British Education Secretary Michael Grove tried to rewrite the curriculum in a way which would have made Equiano’s inclusion in history books optional, but his efforts were unsuccessful.

“There’s no point in taking [Equiano] out,” said Torrington.

Equiano’s autobiography is considered the first “freedom narrative” written by an individual of African descent to the European world.

Dodson said that his narrative indirectly helped to create the Schomburg and Moorland-Springarn archives. “What is significant about what is held in these archives is a people who were denied recognition of their humanity, a people who were claimed to be incapable of thinking and fashioning meaningful lives,” said Dodson, who added that Equiano’s autobiography stands as an undeniable example of humanity triumphing against the dehumanizing experience of slavery and racial discrimination.