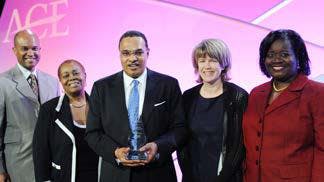 Dr. Freeman Hrabowski III, president of the University Maryland, Baltimore County, has been a mentor in the program and was presented with the 2014 Council of Fellows/Fidelity Investments Award. (Photo courtesy Tim Trumble/ACE).
At 37 years old, Dr. Joseph L. Jones has accomplished more than some seasoned college educators twice his age.

As the founding director of the Social Justice Initiative (SJI) at Philander-Smith College, the Black political scientist, whose groundbreaking research focuses on the intersection of race, gender and politics, currently oversees service learning programs and other initiatives aimed at redressing inequities in society at the Little Rock, Arkansas, historically Black institution.

It’s a cabinet-level position that “interfaces with everybody” and reports directly to the president, says Jones, who held teaching stints at Clark-Atlanta University and Johnson C. Smith University before returning to his alma mater in 2011.

­The job, he says, has now prepared him for the next step in his relatively young career: to become the president of an HBCU.

“I want to be a college president,” he says with confidence during an interview with Diverse. “I want to take the reins of an institution and help push things forward.”

Despite prestigious faculty fellowships at Stanford and Harvard University and a promising career in the classroom, Jones says that he’s now ready to lead an HBCU.

And his timing may be opportune, given the flurry of resignations, firings and retirements in recent years of HBCU presidents. Some have clashed with their boards, fallen short in increasing student enrollment, or simply found the task of raising funds to support financially strapped institutions simply too overwhelming.

But for Jones, who received his bachelor’s, master’s and doctoral degrees from an HBCU, the challenge of helping to transform these historic institutions has been a goal for some time. He’s spent the past few years talking with college presidents about their path to leadership.

“Leaders are developed, not born,” he says. “­Throughout my teaching career, I realized that there was often a clear disconnect between HBCU presidents and not understanding the culture behind HBCUs. A lot of leaders didn’t come from HBCUs.”

His frustration with how so many HBCUs have been managed over the past few decades has now pushed him from the sidelines and into a presidential search currently underway.

­Thanks to the Fellows Program at the American Council on Higher Education (ACE), Jones says that he’s received the necessary training to navigate his way through the daunting presidential search process, where candidates are sometimes vetted for up to a year.

“ACE is the longest running professional development higher education program in the country,” says Jones, who was selected for the competitive program that helps to train and prepare college personnel for coveted senior-level positions in higher education such as chief academic officer and college president.

­Throughout his yearlong participation in the program, Jones and the other fellows learn about budgeting and fundraising, marketing, diversity and other issues that impact the college or university as a whole. Fellows are taught how to design their curriculum vitae and assigned to shadow a college president or top administrator at another institution for occasional visits, an academic semester or for the entire school year.

Jones spent a semester away from Philander-Smith, where he shadowed the chancellor at the University of Arkansas at Little Rock.

“The program is designed so perfectly that you touch on everything,” says Jones, whose classmates in the program included prominent education scholars like Dr. James L. Moore III of The Ohio State University. “It’s a crash course in higher education and filled in a lot of gaps for me and helped me to understand the issues much better.”

The Fellows Program, which will celebrate its 50th anniversary next year, is perhaps the nation’s most successful and well-known development program for higher education professionals looking to advance their careers.

According to ACE officials, more than 1,800 individuals have gone through the boot-camp-like program, with more than 300 going on to become college presidents, deans or chief academic officers.

Though the organization has not tracked how many minority fellows have been hired as college presidents, officials point to recent appointments as evidence of their deep commitment to grooming minority talent for top-level posts within the academy. For example, Dr. Brian Johnson, a 2012-2013 ACE Fellow, was selected earlier this year as president of Tuskegee University.

“It’s about creating a pipeline and a pool of people,” says Dr. Kevin P. Reilly, the former president of the University of Wisconsin System who now serves as a presidential advisor for leadership programs at ACE. “Folks work hard to deal with diversity in the curriculum and organizational change.”

When the program first launched in 1965 with 23 participants, there was one woman, two African-Americans and one Asian in the first class. The incoming group of 31 fellows for the 2014-2015 academic school year is 16 percent Black, 16 percent Hispanic and 3 percent Asian.

“I think it’s one of those rare opportunities in American higher education that focuses on experiences that can broaden a future leader,” says Hrabowski, who has mentored younger administrators like Dr. Jack Thomas, an African-American who went on to become president of Western Illinois University. “Of course,” Hrabowski adds, “the mentors learn as much as the mentee.”

Potter agrees, adding that each fellow has to have the support of their home institution and the receiving institution in order to be successful. In his many years of participating in the program as a mentor, he’s provided fellows with access to himself and other top-level administrators at his university.

Dr. Stephen Joel Trachtenberg, president emeritus and university professor of public service at George Washington University, says that he’s encouraged by those who want to be college presidents. At the same time, he also says “people are running away. Provosts don’t want to be presidents.”

And the dearth of African-American and other minority presidents is noticeable at both HBCUs and predominantly White institutions. It’s one of the many reasons why the Millennium Leadership Initiative (MLI) Institute, run by the American Association of State Colleges and Universities (AASCU), was created in 1999 with the sole purpose of helping African-Americans, other minorities and women advance in leadership positions.

In addition to helping him acquire the necessary skills to advance to the next level, Jones says that the ACE program provided him with a network for life. “We really bonded,” he says of the other fellows. “Everyone comes to the table with such a rich background and we’re taking this journey together. They’ll be friends for the rest of my life.”

Whether Jones makes the cut this time around or is forced to wait a few more years, he says that he remains determined to reach his goal.

“I’m committed to being a president of an HBCU,” he says. “I have a front-row experience. I know what the problems are and I know what needs to happen to turn our schools around.”