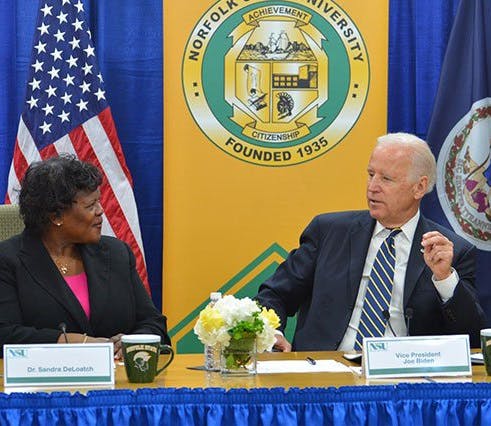 A consortium of 13 historically Black colleges and universities in partnership with two U.S. Energy Department national laboratories and a South Carolina school district has launched an ambitious pipeline initiative aimed at recruiting and training cybersecurity professionals and researchers.

State and federal officials, including Vice President Joe Biden, U.S. Energy Secretary Ernest Moniz, and Virginia Governor Terry McAuliffe, traveled to Norfolk State University (NSU) on January 15 and announced that the Norfolk, Va.-based historically Black university is leading the Cybersecurity Workforce Pipeline Consortium. The Energy Department’s National Nuclear Security Administration (NNSA) has established the consortium with a five-year, $25 million program grant to “educate, train and develop the nation’s next generation of cybersecurity professionals.” Launching the consortium is an effort by the NNSA to expand as well as diversify the nation’s cybersecurity workforce.

“The demand for cybersecurity professionals is growing 12 times faster than the rest of the U.S. job market. … This is a burgeoning field. It has enormous potential for any student from any neighborhood [and] from any school,” Biden said during the consortium launch event.

“Cyber espionage is a new weapon and tool as potentially dangerous as a piece of ordnance, a bomb. It is staggering what potential vulnerabilities exist, but the good news is that we have basically been ahead of the curve,” he noted.

U.S. Senator Tim Kaine, D-Va., a member of the Senate Armed Services Committee, said in a statement that “improving our nation’s cybersecurity will require collaboration among all stakeholders,” including those in the public and private sectors.

“I’m pleased Norfolk State will play an important role in developing a skilled workforce prepared to handle our nation’s cyber challenges,” he said.

The idea of including K-12 schools in the consortium sprang from NNSA leaders wanting HBCUs and the national laboratories “to create an effective pipeline that would start in the public schools to get young people interested in cybersecurity and STEM so they hopefully go to college, major in these areas, and then become candidates for employment at the national energy laboratories,” said Dr. Sandra J. DeLoatch, the Norfolk State University provost and the consortium’s principal investigator.

DeLoatch explained that since 2009 NSU has gotten funding from NNSA for cybersecurity training and research and that the school had led a smaller HBCU cybersecurity consortium dating back to 2012. NSU has been recognized by the National Security Agency and the U.S. Department of Homeland Security as a national center of excellence in information assurance education going back to 2009, according to DeLoatch.

“NSU actually led a small consortium of schools that were working in this area and because the issue is so grave right now in terms of the shortage of cybersecurity professionals” the NNSA chief scientist Dimitri Kusnezov suggested establishing a larger consortium with a K-12 outreach component, she said.

DeLoatch explained that, in addition to collaborating with Charleston County schools, consortium members are working with K-12 schools based in their local communities, such as Norfolk and Greensboro, N.C.

“We’ve been working in cybersecurity for several years. … We have the graduate programs, and, as undergraduates at consortium schools consider a master’s or a Ph.D. program, we hope they’ll come to North Carolina A&T,” Williams said.

The Lawrence Livermore National Laboratory in Livermore, Calif., and the Sandia National Lab in Albuquerque, N.M., are part of the consortium and will provide training and research opportunities for consortium interns. The respective laboratories manage and coordinate security of the U.S. nuclear weapon arsenal.

University of the Virgin Islands