Paul Quinn Students Buy In to Dressing for Success Policy 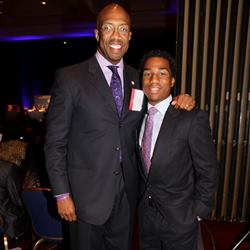 Dr. Michael J. Sorrell, president of Paul Quinn College, left, in Dallas with Kevin Lee, a sophomore. Sorrell instituted a business-casual dress policy for the HBCU and developed a Clothes Closet that students can visit and pick out free attire to wear to job interviews, classes and internships.

DALLAS — When Dr. Michael J. Sorrell instituted a business-casual dress policy for his students at Paul Quinn College many years ago, some were a bit hesitant to embrace the idea.

But roam the sprawling private historically Black college today, and you’ll encounter droves of young men and women who don dress suits and blazers as they head to and from class. The dress code has now become a part of Paul Quinn’s culture and uniquely distinguishes them from so many other students attending colleges and universities across the nation.

“It’s nice to see students dressed up and looking professional because you never know who you are going to meet on campus” said Kevin Lee, 21, a sophomore, whose dorm room closet is filled with a handful of dark blue and black suits, nicely pressed dress shirts and more than a dozen colorful ties. “It’s important to look the part and be presentable when you’re at college. It just creates a different perception for people.”

For Sorrell, who has made national headlines and won praise for turning around the once-troubled Dallas HBCU, the dress code is part of a long-term plan of preparing students to enter the professional workplace—as a college intern or as a graduate—acutely aware of how to dress.

Throughout the academic school year, the dress code at the African Methodist Episcopal affiliated college is strongly enforced from Monday through Friday from 8:30 a.m. to 5:30 p.m. Anyone caught out of dress code can be issued a fine of $200, and there are signs throughout campus that list the fashion no-no’s.

They include: no sagging pants, hats inside the building, tennis shoes, doo rags or shirts with profanity. Sheer garments without proper undergarments, halter tops or dresses, or head scarfs won’t be tolerated either. Men are expected to wear collared or polo shirts, khaki pants or slacks and a tie is optional. Women should dress in slacks or khaki pants, blouses, collared shirts or skirts and dresses (“no shorter than your finger tips”). Jeans and shorts are only permitted in the evenings and on the weekends.

To alleviate criticisms that a dress code would require students—many of whom hail from low-income families—to buy new clothes, Sorrell developed the school’s Clothes Closet and filled it with everything from suits, shirts, dresses, ties and shoes.

The clothes are donated by individuals across the nation, and students—on a first-come, first-serve basis—can visit the closet and help themselves to whatever items they need free of charge.

“You don’t have the clothes, no problem. We got your back,” said Lee, an honors student and president of the sophomore class. “There is really no excuse not to comply with the dress code.”

Initially, some students were reticent to take clothes from the closet because they viewed the items as hand-me-downs.

“I told them, ‘You can’t think about it that way,’” said Sorrell, who has been president of Paul Quinn for the past eight years. ‘You have a need, and there are folks out there who can help meet the need.’”

Tony Edwards, 21, a junior from Chicago, arrived in Dallas as a freshmen with some dress clothes but not as many as he found out that he would need for classes every day.

Over the years, he’s made several trips to the clothes closet and has never left empty-handed.

“They have some great shirts and ties in the closet,” said Edwards, with a grin. “They have some fancy shoes, too, but with my size, I haven’t been able to fit any of them.”

Like Edwards, Jamal Mack, 24, a senior from Austin, Texas, has stumbled across a range of designer clothing and even had a friend who found an expensive Armani suit in the closet that he used for a last-minute job interview.

For Mack, the clothes closet makes sense and is a model that he said should be replicated at other colleges and universities, particularly HBCUs.

Sorrell said that the college accepts donations for the closet year-round.

“People have responded,” he said. “Whatever students need, they can often find it in the closet.”